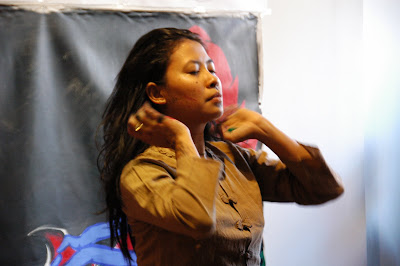 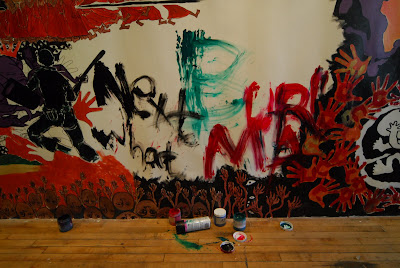 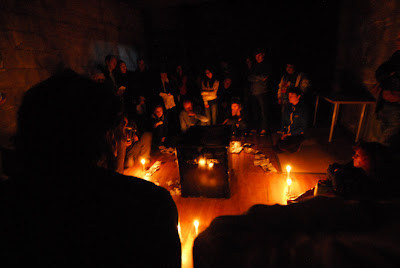 As the crowd emerged into the Free Gallery, we saw creative resident Chaw Ei Thein's finished mural. In addition to what I have already described in previous posts, the artist had now addressed the other half of the canvas, incorporating an embryo surrounded by bloody handprints, purple people linking arms to creating a line across the mural and a blue woman, being encroached upon by a demon, with a dove emerging from her mouth. A mural of bold contrast and fantastical colours, Chaw Ei's work presented themes of imploring hands and silent eyes. 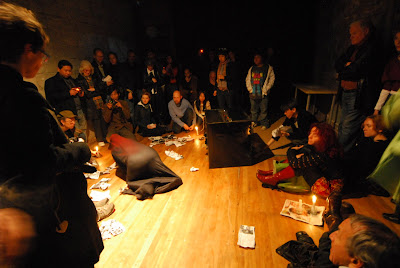 Eventually we were led into the back room of the gallery, in the centre of which sat a large cardboard box, painted black, with eight candles in a circle around it. The audience gathered tightly into the space and the stillness was overwhelming -- the shuffling of bodies was stifling in the room. After a very long moment, we heard scratchings, shufflings from inside the box: the sound of crumpling paper and shifting cardboard. A hole began to emerge in the side of the box, and soon another hole on another side. From this second hole, crumpled paper was pushed through -- scads of it, onto the floor. After a few individuals came up to take some paper and read what was written on it, one of the members of the Toronto Burma community took it upon himself to bring handfuls around the room. A feeding frenzy (or rather a reading frenzy) began as everyone in the room was flattening out the papers -- photocopies of news articles regarding the actions of the military junta in Burma, and the ineffectual international outrage -- and still the papers kept coming out of the box. 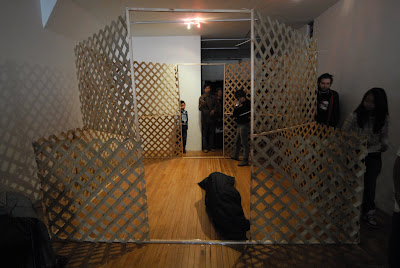 But soon the papers stilled, and more ripping could be heard. The box was being torn apart from the inside; the hole on the side was getting bigger and bigger, and black cloth was pushing out. After several attempts, Chaw Ei emerged, encased entirely in a long black bodybag. She writhed and wriggled free of the box and groped her way out of the room, clutching at audience members' ankles and banging walls in her desperate attempt to escape. She emerged into the main gallery, still reaching blindly, until she was able to find her mural and the paints set up in front of the blank space left in the centre of the canvas. 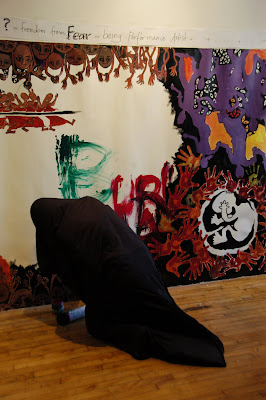 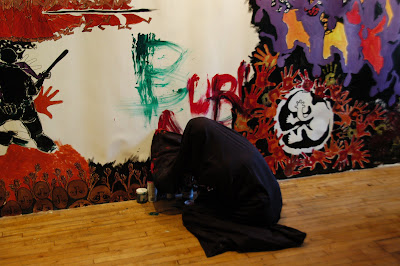 The emotion was overwhelming as we watched the artist, still trapped in her bodybag, open the paints and use her cloth-covered hands to smear letters across the mural spelling "BURMA what next?" After this Chaw Ei was finally able to shed her mobile prison -- but even still, she exchanged her salmon tank top and black pants for the traditional (and often culturally enforced) clothing of Burmese women. With tears still fresh on her cheeks, she handed out articles to the audience about the brain drain in Burma, the trend in young people who are able to get their educations abroad and never return to help their old country. Quiet River is an ordeal from which Chaw Ei has been able to emerge, but even still the images and emotions are haunting. 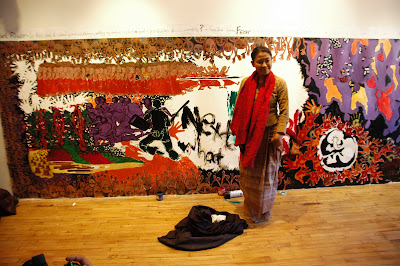 ~Elaine
Posted by 7a*11d International Festival of Performance Art at 11:02 AM