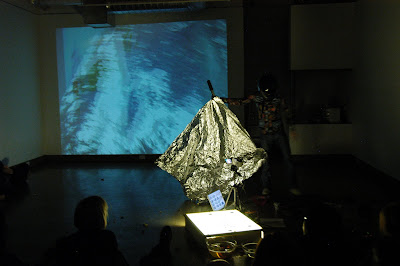 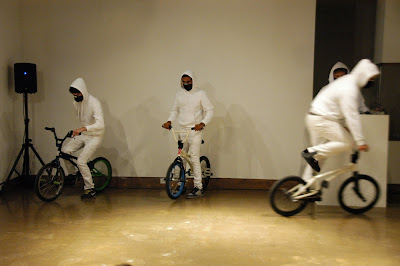 Robin Poitras began the day's performances with a presentation of 'Sometimes Three' alongside Brenda Cleniuk and Leanne Lloyd. They collected in front of the Design Exchange, a single serious line of black accented in brass and red leather. The premise of the piece was simple: the three artists sat on wooden benches, with black umbrellas open and horses' bells draped across their legs, using the motion of their bodies to sound the bells. The response it evoked was much more complex.

The image that I saw in their performance was of three Apollonian priestesses/Oracles intertwined with the three witches of Macbeth. Heralding out a coming prophecy, and deliberately linked to the fluctuating stock exchange, the sober act continued in the back courtyards of the financial district. The trio made tighter and tighter circles as they continued to perform -- something big was coming, and we should all be prepared.

In any case, the visual impact of the piece complemented the aural chords, as the sets of bells mingle and chimed. Each performer shook at her own pace, creating her own pattern of notes; they were connected but individual, inseparable but independent. Mimicking the bells of the stock exchange, the bells of the performance sped up and slowed down, alternately marking out strict tempos and rushing through jumbles of notes.

At the end of the performance, the artists gathered their materials, stool under one arm and bells and umbrella hung carefully on the other, hand outstretched as if waiting for a sign. They walked slowly through the same CIBC that had Sakiko Yamaoka so worried the other day, and brought their performance full circle to the street.

Jason Lim set the Hallowe'en tone for the evening as he performed a durational work just outside XPACE. Standing with a trio of glasses under each foot, he drew black thread from a large spool and draped it loosely on his hand, his arms moving back and forth as if he were an automated anti-spinning machine. As he progressed, pausing occasionally to check its size and watch it flutter in the wind, the variation in the lengths of thread took on the appearance of a wig of human hair. Which was exactly Lim's intention as in the finale of his performance he donned the wig (shot through with threads of red) and carefully kicked out the glasses from beneath his feet until he could balance no longer.

The evening's indoor performances began with Don Simmons' 'Picked you out of my pocket and death was the door prize', a bit of a spectacle for the gallery. (Forgive me for not having the proper vocabulary to describe this piece!) Three stunt bikers rode into the studio space slowly, dressed in hooded whites and black dirt masks, while Simmons stood at his audio booth and freehanded the audio layer of the performance. 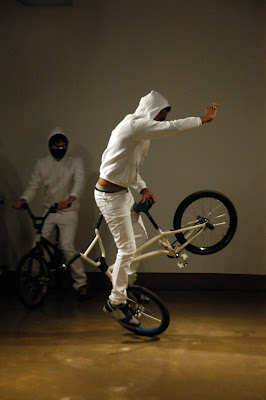 Photo of cyclist participating in Don Simmon's performance by Henry Chan.
Street ambience, howling wind and effects like smashing glass and honking horns layered themselves as the bikers lined up and performed stunts one at a time. Every so often all three would ride up toward the edge of the audience, as if to leap over them, but pulled back at the last moment. I wasn't sure if the audio was reacting to the cyclists or vice versa, but as the riders progressed through their stunts the layers of the audio got thicker and harsher until all audio and light dropped. A projection came up on the back wall, describing the process of leaving ghost bikes: bicycles painted white and left at accident sites as homages, as eulogies, to mark the passage of fallen cyclists around the world. The written text explained the vulnerability of a cyclist in a process of introspection, and the contrast between action and stillness, between audio and silence, marked the moment all the more sharply. 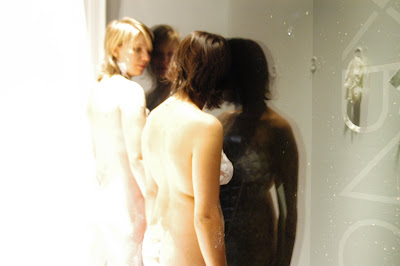 Photo of Natasha Bailey and Danielle Williams by Henry Chan.

From the window of the gallery came a durational installation from Natasha Bailey & Danielle Williams. The floor of the window nook was littered with electronic correspondence and on the back wall hung a painter's jumpsuit, latex gloves, a pair of white socks, and a paintbrush. On a stool sat a bucket of flour paste. 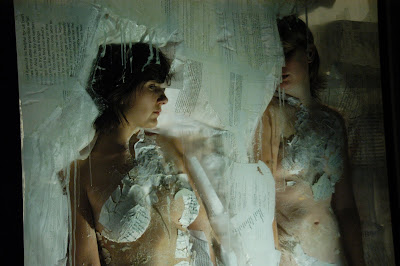 Photo of Natasha Bailey and Danielle Williams by Henry Chan.

Into this 'seen unseen' scene, the two artists emerged clad only in strategically placed scraps of papier-mache. Taking their places on the raised floor, their hands clasped and their bodies pressed against the glass, the duo struck an image in the window. Mahan Javadi entered the picture, dressed a bit like an exterminator without the gas mask, and slowly began to entomb the artists against the glass with their own words. At first the pair free to talk but as the layer of paper moves further up their bodies, they are stifled into stillness, eyes closed and almost mummified.

This shared experience, similar to Angelika Fojtuch's last night, read as a comment on human relationships, on what they can weather and how easily they can be buried. We are reminded again that relationships are an endurance. The artists are on a search "for honest communication" (as per their self-description in the catalogue), and yet even this live action is mediated by the history of all the text and words that have transpired between them. In the end, though, Bailey and Williams were able to tear free of their confines and revel in the reality of their interaction, knowing that they have weathered at least this much together. 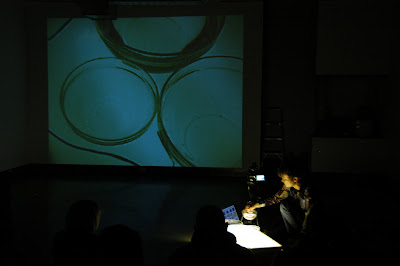 The technical phantasmagoria of Sini Haapalinna bore an apt name in 'KALEIDOSCOPOPSPECTACAL Live Cinematic Trans Flux', as the gallery became a playground of light, sound and video effects that I must admit are right up my alley. Using an audio effects unit, a series of contact microphones, a light box and a live video feed with programming (delays, inversions, etc), Haapalinna created a series of abstract sound and image vignettes that warped the frame of commonplace objects (bowls of water, plastic toys) into an epic document of the crumbling of life's structures.

As the visual and aural images distorted and layered atop each other, each sound and image invoked another series of sounds and image -- nothing was simply what it was, but was a metaphor, an allusion to other worlds. Clinking bowls became a procession of monks' chimes. Piling bubbles became a mountain of fish eggs while the sprinkles used to break them appeared as a spreading bacterial invasion. Bird calls were reverberated into a haunted forest, and empty bullet casings became bombs as the land of the dinosaurs was bombed to smithereens by army men. 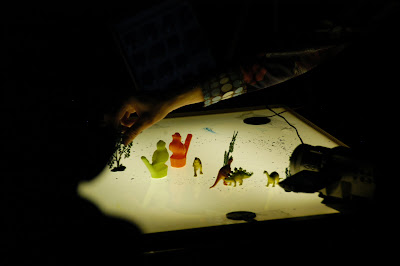 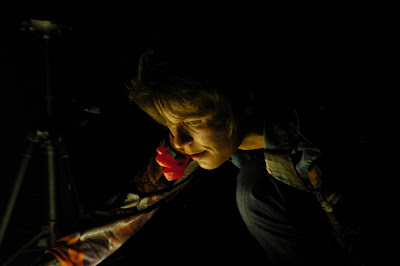 Time slowed and swirled in the projected image as photographic slides were placed on the lightbox and the camera pressed right up against them to create a composite cityscape in which the statue of liberty decomposed slowly on the screen into the ghostly image of the LED lights strapped to Haapalinna's body as she whirled before the camera. And time reversed on itself as she used a laser pointer to create the look of burnt celluloid in a supremely digital medium.

The final performance of the night was BBB Johannes Deimling's 'No rose without a thorn'. Unceremoniously, he blindfolded himself with his sweater -- and the blindfold continued as he took off each article of his clothing and wrapped it around his head. He even included his shoes, using four pieces of twine to hold the mass together. 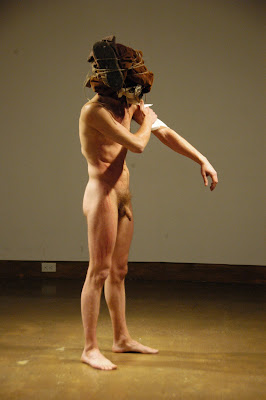 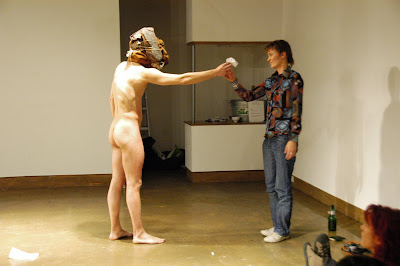 Then he began scratching himself furiously, raising red lines and drawing blood from his skin before finally wiping himself down with a small napkin. Blind and bloody, he folded the napkin into a haphazard flower and proffered it to the closest audience member, though it took three tries before Haapalinna stood to accept the blossom. Deimling had become his own thorn, commenting on the often self-destructive nature of love and how the idea of blind self-sacrifice, while romantic enough, I suppose, in novels, becomes out of place in reality where awkward silence usually reigns.