Day 11: Observations on The Panel and Rules of Engagement (AJP) 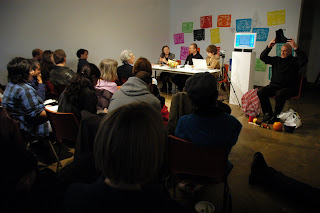 On the 2008 7a*11d festival’s final afternoon, a panel was held with the title of Terms of Engagement: Presence and the Performative. The panellists were Helsinki-based artist Annette Arlander, Paul Coulllard, and Johanna Householder. Tanya Mars was scheduled to participate in the panel live from Paris, but technology did not cooperate. Norbert Klassen also performed an “intervention” during the panel or, rather, he entertained the audience with a brief performance parallel to but not contravening the panel. (What exactly is an intervention? Does it usurp, or complement? Is it confrontational, or agreeable?)

This blog posting is predominantly my response to themes of and from the panel, rather than a summation of the panel itself. It is from my own perspective as an audience member for practically the entire 2008 7a*11d festival, a frequent audience member at other performance (or performative) events and/or exhibitions, and my own experience as an occasional performance artist. It is also a revisiting of many of the individual performances and actions hosted by this biannual festival.

The bi-annual 7a*11d Festival received many applications which, in the collective’s opinion, could be considered “performative”, but not particularly performance. “Performative” has often been a usefully vague term - it can refer to many different instances of art and/or presentation. Formation of an image can be considered performative, whether or not bodies are physically present in the process. Presentations that contain elements of other disciplines - projected film, painting, whatever- in addition to bodily presence can also be called “performative”. The term also has become a cousin of what is broadly categorized as “relational art”- art concerned with creating “social space” or engaging with a if not the community.

Relational or social or (even) community art practices have become rather commonplace in Toronto’s non-profit and even public (maybe even private) galleries. There are of course major variances within this very broad category of image-making and/or performance. There are exhibitions and performances that are as much about the social space created by the audience that is tuning in and out of the exhibition or performance, rather than that audience remaining locked into a passive relationship with what or who is on the wall or on a proscenium. There are events where an image itself is modified by its contact with an audience or participatory viewers - performances that require an active rather than passive audience. And there are relational art events that really aren’t about much more than tea and chat with a visiting artist, whose name is on the wall or the marquee and who doesn’t really do much beside encourage his or her audience to drink tea and chat.

The 7a*11 Performance Festival received numerous proposals for varying degrees of relational, social space, or community arts claiming to be performances, and decided that such work was already none too difficult to find and therefore 7a*11d did not need to programme any more of it. This decision is based on different sense of engagement with the work 7a*11d has chosen to programme - different engagements both from the performers or artists and also from the audiences. Although 7a*11d this year did programme pieces that were more of a static/sculptural nature than of body-generated actions and demonstrations, those sculptural pieces still involved the artists' own bodies either pushing or being pushed to their limits. There was one piece - Don Simmons’ Picked you out of my Pocket and Death was the Door Prize - in which the titular performer was in fact the director and/or sound mixer. But this performance also utilized three daredevil cyclists who most certainly did place their bodies at risk.

This body was the connective throughout the festival. This was a performance festival for a performance audience - one willing to make commitments parallel to those of the performers. These commitments were of time, stamina, intensity, and much more.

I have over the years witnessed performances also witnessed by audience members rooted in other disciplines - theatre, conceptual art, film/video, music, whatever. I once had a conversation with a theatre-artist about a particular performance that was in fact rather theatrical, but static - a tableau I believe. The performance was not in a theatre or gallery - it was in a specific but public location. The theatre artist wished that the performance artists had acknowledged the audience more. I thought that was a really daft criticism, since the performers had in fact made their tableau highly visible at a distance calculated to heighten their visibility to not only an attending audience but also to pedestrians and other members of “the public”. Surely those artists were honouring the appropriate rules of engagement? During the 2008 7a*11d festival, the overwhelming majority of artists engaged with their audience(s) in that they defined space, established their intentions, and maintained attention via their bodies and/or gestures.

Time, or investment in time, is central to so much performance art for both the performers and their audiences. Time is, if not an exact synonym, surely a cousin of duration. Some of the 7a*11d performances (John G. Boehme, Angelika Fojtuch, others) utilized either the entire gallery space or the entire audience and thus created quite social spaces. One could watch in admiration or amusement as Fojtuch and her bandaged/bondaged captive (or husband) slowly moved through the crowd throughout the gallery. One could chat and gossip with neighbours as Boehme one-by-one carried the entire audience on his shoulders in Belonging Networks: a social utilities performance. It became clear that such was Boehme’s intention, although not final intention. By contrast, other performances engaged by means of performer focus and intensity. Small gestures, if amplified, can become big gestures - when the performer(s) make visual, sculptural, emotional, and other forms of contact or connection or engagement.

I did feel occasionally as an audience member that I was unable to engage with a few of the performances to the degree that I would have liked to. seen unseen, by Natasha Bailey and Danielle Williams, was presented in the Xpace window concurrently or parallel to Sini Haapalinna’s Kaleidoscopopspectacal (live Cinematic Trans Flux), which I found worthy of complete attention. However, the endless sound of the door to the street creaking as people went in and outside to take in the window performance prevented a complete engagement with the indoor performance. On the final performance evening, I would have liked the option of alternating between Annette Arlander’s Wind Swept- variation upstairs and Marilyn Arsem’s rather Gothic durational/installation in the basement. Both of these visually effective pieces placed the performers' bodies in relation to a projected landscape and a rather cinematic environment respectively. But I didn’t feel that I had the option of moving back and forth without creating commotion and disturbing the calmness crucial to Arlander’s presentation.

In conversation with another audience member, it was suggested that Warren Arcan’s Nosferanook was too short or abrupt. I completely disagree. Arcan made wonderful use of the opportunities provided by such a classically mouldy basement. He entered as an Owl - in a fantastic costume that he had designed in tandem with his Creative Residency. He made it clear to where in the space he was heading to, and then completed his intention by chopping at the wall (a perfectly durable wall). It took a while for it to become apparent that there wasn’t another act as part of Arcan’s act - that he was going to continue chopping until the final audience member moved elsewhere or clued in. Nosferanook was a relatively brief performance, and highly effective in its brevity. It was an equation, a metaphor, a pair of symbolic gestures. Owls are wise but they lack olfactory facilities, so they persist in knocking at walls that will not fall down and reveal their hidden treasures. Arcan, like any good creative resident, engaged with his contract, his environment, and his brain, and arrived at a clear and effective performance.

It is probably self-revealing that I spent as much time regarding the beautiful oscillating images of Nicola Frangione’s Voice in Movement as I did watching the performer. Admittedly, I myself am more committed to making media-art than I am to live performance, but it was also the novelty of having something to focus on beside the performer’s body and its by-products that I found refreshing. Another festival participant and observer thought that the gorgeous black and white images detracted from Frangione’s performance, and the performer’s body language was certainly intricate enough to warrant sole focus or engagement.

On Friday October 24th, I ate a roti at a wonderful little restaurant near the Toronto Free Gallery on Bloor near Lansdowne. Across the street from Vena’s Roti, the venerable Toronto artist-run gallery Mercer Union has just opened its new space. I decided that, since I was in the neighbourhood, I had time for a quick visit to an art opening - intending to return later and spend some time with the art. I of course recognized many artists and colleagues from the visual art “community", and explained that I was in and out quickly because I was working as a blogger for 7a*11d. That was of some interest, but at that moment Mercer Union and its audience seemed like another world. My contract with performance art seemed to involve a different mode of commitment - not only temporal but physical. So I headed over to Xpace, and engaged with my own engagement. This was an engagement involving commitment, stamina, and duration, and also alertness. Such was the nature of the contract.

Photo of panel participants and Norbert Klassen by Henry Chan
Posted by 7a*11d International Festival of Performance Art at 11:02 AM

I appreciate it very much, at least I know from it someone is reading the contents I have here.