Francis O'Shaughnessy & Sara Létourneau, I have nothing to say about my day, XSpace, Friday October 29, 2010 (NL) 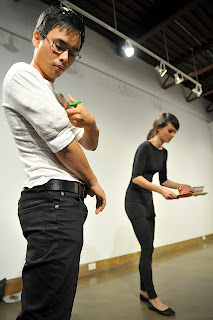 We are arranged in the space. Francis O'Shaughnessy tells us where we can sit – there, no further, that is good - and pauses. Sara Létourneau enters with two china teacups, complete with saucers. O'Shaughnessy
takes a pair of scissors and cuts a slit in his shirt. Something is bundled under the fabric, at the bicep. Létourneau puts her knees in the two tea cups – which have a clear liquid in them that I later learn is bleach – and stands, looking at us. She takes bread out of her bra and eats it. He takes bread out of the cut in his sleeve and eats it. They stand. She looks at the audience and he paces, both eating. Stand. Pace. Eat. Look at the audience, impassive. Repeat. It seems almost like a force-feeding, the way they keep on eating the dry bread without swallowing. Their mouths full. She starts to twirl her hair. Standing. Staring. Chewing. He takes out the scissors again and cuts the lock of hair that she has meanwhile twisted and held out. He puts the hair down his pants. This seems to break the monotony of the chewing. Each takes a tea cup and removes it from the saucer, placing it closer to the audience. Then they lean over the saucers, in concert, and open their mouths, dropping the bread balls they've been chewing onto the saucers with a plop. The bread action over, they move the plates to the side. An off-kilter invocation of domestic ennui.

To continue their portrait of dystopic gender relations and family life, Létourneau takes out a spool of red thread and a needle while O'Shaughnessy cleans the floor of breadcrumbs with a paper towel. He then walks slowly across with the cups, filled to the brim with bleach, doing his best not to spill, and places them to the side. Taking out a length of grey yarn, he ties each end to each of the teacup handles. Létourneau meanwhile has threaded five needles to the same thread. He cleans some more with the paper towel while she pins the needles to the wall in the shape of a house. A plaintive drawing against the gallery wall. O'Shaughnessy then undoes his zipper and gropes inside his pants, looking for something. Finally, he pulls out a flower. A daisy. The audience giggles. He does some improvised calisthenics - jumping jacks and push-ups. Bread crumbs are flying from his sleeve, littering the floor he has just cleaned. She stands inside the red-thread house and looks at him. Coyly she takes off her tights. Shoes. He drinks a sip of beer from an audience member. She puts on a pleated skirt. He takes off his T-shirt and puts on a long-sleeved one. Létourneau moves to the center of the space, bringing the thread with her, and O'Shaughnessy lets himself get caught in it. 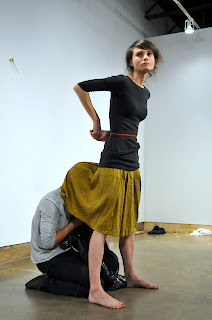 Then, grabbing a large garbage bag from the corner, he kneels behind her.

He puts his head up her skirt and she sings How Long Has This Been Going On while he works at doing something up her skirt. Létourneau, the red spool of thread still in her hands, proceeds to wrap a thin line around her waist. As she sings she continues, round and round, the thin red line getting thicker and thicker. I could cry salty tears / Where have I been all these years / A little while, tell me now / How long has this been going on? With her tiny a capella voice and her French Canadian accent, she sings. All the while he continues to work under the skirt. There were chills, up and down my spine / Yes, there're thrills I can't define / Listen sweet, while I repeat / How long has this been going on? He comes out of the skirt, sighs as if exhausted, and removes the bag. Breaking the thread, she throws the spool away.

At this point O'Shaughnessy places a cutout icon of a woman on the floor of the gallery. Turning, he proceeds to Létourneau, who is standing against the wall, in "customs search" position. 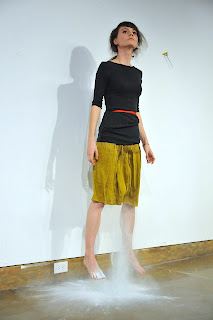 Again he crawls under her skirt, pierces something, and some white powdery substance comes rushing down, causing many audience members to leave as she jumps and whatever it is – something at least somewhat toxic judging by the audience reaction – billows out into the space. Done, Létourneau stops, stares at the audience, takes off her skirt, and reveals two cans of Comet strapped to her thighs. O'Shaughnessy then takes off his shoes, walks across the space, puts away the woman icon cutout, and grabs the grey yarn holding the cups filled with bleach. Létourneau lies down in front of O'Shaughnessy and, with the yarn across his waist, he walks forward, dragging the cups that are now dripping bleach, while she rolls in front of him in slow motion. When they reach the end of the space they stand together and bow.

[all photos by Henry Chan]