We are less than halfway through Spencer’s ten-day performance action: sitting for eight hours a day on a set of benches near the Front street entrance of Toronto’s Union Station. I approach the performance site half expecting not to see her. Expecting that at this point she might foil expectations, change the rules of the piece and sit somewhere else. But no, she is still there. And this makes sense, as one of the things that Spencer is curious about is how long she can “loiter” in one site before someone – anyone – asks her what she is doing there.

I approach her, ask how her day has been - it's now four, the workday is almost done - and about yesterday. It was great! she says. A couple people came to see me after reading the blog and sat there watching me for an hour before introducing themselves. I had no idea I was being watched. I sit down with Karen again and think about this. I look around. Could I mistake anyone for a surreptitious observer? There’s one young man, maybe twenty years old, texting and glancing up now and then. He could easily be an art school student. I look off into space, sitting, and imagine him watching me. A wedding party enters. A woman with a limp passes by. A Muslim woman struggles by with a baby carriage and too many suitcases. Someone catches my eye and then looks over at Karen. Is he here for the performance? No, his eyes move on and land on his travel partner and they move off.

If day one, for me, was about sight, and day two was about sound, today what I notice most is the cold. These seats are directly in front of some vents and after only twenty minutes I am chilled to the bone. The other thing I notice is a kind of anxiety linked to boredom, both actual and prospective. I am not actually bored, but the moment I stop and just sit, contemplating eight hours a day every day, I begin to feel the oh god what have I gotten myself into and how and I going to do this that I often feel at some point near the beginning of my own durational pieces. It's a sensation linked to moving towards the unknown in an experience. It's a sensation linked to any act of experimentation: the parameters are set up and the phenomenological journey embarked upon, in all its unexpectable complexity. 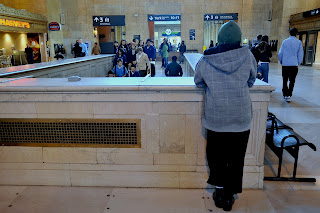 Spencer spends most of the time I'm there alternating between sitting and standing next to the chairs. While the performance is called Sittin’, today it is more about loitering than sitting. Sitting as synonymous for occupying space. I loiter, in solidarity, and wonder how long it will take for someone to say something to her – whether a question: what are you doing here everyday? Or a command: stop sitting here every day. I also wonder at my desire for exactly that – for some drama. I remember Spencer talking to me a bit about her inability to just drift off and relax during her days because of the site she has chosen: directly in front of the “Red Caps” – people who function, as far as I can tell, as a mix between security officers and porters. Sitting in front of them keeps her always alert to her role as public performer, as interloper, as potential problem. I think about this as I loiter in front of the Red Caps, trying to ignore them and dissolve into my surroundings, go back into the visual or sonic detail of the site. I listen to the echo of the hall, to a couple arguing in a corner. I wonder how long it would take me to exhaust my surroundings and what, exactly, exhaustion might mean in this context? Would I just keep peeling layers away from the space like an onion? Only if I wasn't chilled to the bone. Maybe someone reading this will bring Spencer a windbreaker...

[Image by Henry Chan, from a different day]