Fernandes sits quietly in the space. An amplifier buzzing and a microphone in front of him. 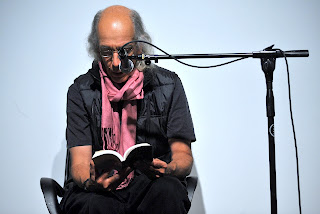 He pauses, a book in his hands, and looks at us. Putting on his glasses he opens a book and slowly, gently, begins to read. Between the human point of view and that of a fairy or a member of the angelic kingdom… One of the main differences is that we live in a world of form and they in a world of life. The words fill the space and we wonder, a bit, what it going on. The book he is reading from is called The Real Book of Fairies by Dora Van Gelder. He continues to read quietly slowly, sitting hunched. A bottle of water at his side, his signature blue bag behind him. To the fairy the tree is a living breathing personality which is expressing itself in the form we see…Most of our world is composed of inanimate things that seem to be dead. Not only are we surrounded by rocks and animals… Ours is a world of objects. But a fairy never experiences anything of this character. He reads to us. We move from a description of the world of fairies – one that is radical ecological in nature – to a description of the fairy itself as a creature with porous boundaries, living in a continuum with the natural world. We are in an impromptu bedtime story session. We are forced to just listen – an odd proposition in such a visual context. At a certain, seemingly arbitrary, point, after thirty or so minutes of reading, he stops. It goes on. He says to us. And then, picking up his things to go, almost as an afterthought he says: It is not political.

He leaves. We clap.