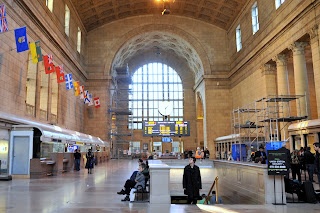 It is 2pm and I am wandering through Union Station to find Karen Elaine Spencer, who is performing a durational piece called Sittin'. Over the course of the festival she will sit from nine to five each day in the same spot at Toronto’s Union Station. I wonder about the choice to sit, for a full day, in the same place. If it were me, where would I sit? What kind of place? A designated seat? A corner of a stairwell? In the middle of a throughway? It takes me a while to find her – she is literally in the last place I look, and I find her right before being ready to give up.

Spencer is sitting, nondescript, in a corner, five chairs in front of the Front Street entrance. She sits in her hoodie and drab old sweater staring into space. As I approach she greets me and I ask how the day has been. No one has bothered her yet. She has taken food and pee breaks, always returning to the same seat. I ask if I can observe for a little while, and step back to decide where to sit. Sitting in front of her and watching seems, somehow, wrong. Though designated performance, this action doesn’t want attention. Her body posture invites the eye to move on: arms gently crossed over bag, slightly slumped, and eyes staring into the distance, first left, then right, as if waiting. I am reminded of Faith Wilding’s poem and performance “Waiting” and decide to sit with her for a while, to try and get inside the performance for a bit.

In front of us are three advertisements. I wonder how much time she has spent staring at them. I find myself fixating on the people passing by. How they walk. The middle aged man slumped at an unnatural angle under a duffel bag; the aging couple shuffling towards the coffee shack. The workers. The crinkle of a donut bag being crumpled and thrown away. Everything is suddenly worthy of attention as I contemplate the task of sitting here from nine to five. Nine to five: a full day’s work. The temporality of industrialized labour. The train-station as site. My back begins to hurt and my eyes move to the roof. The architecture. The signage with departure times and destinations. I expect that all of this has, over the course of the day, moved towards a kind of local, inhabited knowledge for Spencer. I wonder about the patterns, temporal rhythms, and textures of existence she must be experiencing as time stretches and slows over the duration of the performance.

I leave her sitting.

[Image by Henry Chan, from a different day]

An illustration of the Foucault idea that the production of the working body is the main effect of modernized,
alienated work? Thematizing the
rigorous discipline, endurance, and physical
effort that is required to simply remain present at a
workplace from the beginning of the working day
to its end?
Kenny