I enter the back room at Mercer Union, and in the dim light see Norway’s Stein Henningsen lying on the floor, weighted down by a four-hundred-pound block of ice. It is strapped to his back. He lies forehead to ground and hands tucked in underneath, presumably to help support his shoulders and neck, allowing him to breathe. I am confronted with the juxtaposition of Henningsen's body and the block, reaching perfectly from knees to shoulders.

He is wearing a blue shirt, black pants, and dress shoes. I can see right through the ice to his back, where his shirt is drenched by the melting block. Water creeps across the floor, like blood. I imagine what the ice will look like when he is done. Whether it will have an imprint of his back. And then I start to meditate on the beauty of the block of ice. So massive. So clear. Glistening in the dim light. Through it I can see people walk in to the space and pause at this sight – there was no announcement of the performance. It is unexpected. The audience in the main gallery space doesn’t know that Henningsen is performing. I hear someone ask how long he has been there. Presumably through the whole previous performance another person answers. Word spreads and the audience grows.

Someone comes to tighten the straps holding the ice to his back, and the performance is officially announced. The crowd moves in and Henningsen slowly begins to move. First hands out. Then head up, slightly. Nose hovers over the floor. The strain of the block is evident. His feet and knees quiver and it is clear that he is trying to traverse the floor but doesn’t know quite how to do it. Eventually he develops a kind of push and slither motion and slowly worms towards the main performance space. 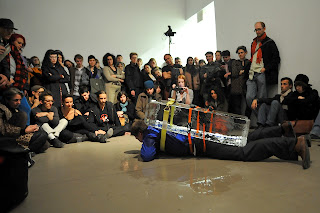 Slowly, painfully, he grunts his way inch by inch. His legs look almost broken from the weight of the block, his toes at an odd angle scraping against the floor. Like a slug leaving behind slime he begins to make a trail between the spaces, each slide accented by a long groan. I am behind him, watching the progress. I see his arms come out at an angle and have the impression of some impossible insect with a crystalline, unliftable shell.

I move into the other room. Brightly lit, the larger room is empty except for a single knife that lies in the middle of the floor. The effort that Henningsen is exerting to get to the knife is intense. By now he is soaked fully through, from knees to shoulders. He reaches the knife, grabs it and struggles to flip onto his side. The block thuds to the ground and, obvious relieved, he lies panting for a moment. Henningsen then begins to flail against the straps and it seems that he is trying to maneuver his weight to flip over, onto his back. His effort as he strains and strains again to try and flip is real. No mere theatrics. It is like watching a beetle stuck on its back, struggling for its life. Eventually it becomes clear that he simply cannot flip the block of ice. Stuck on his side, he takes the knife to cut himself loose, knife moving in at odd angles, precariously close to penetrating flesh. Eventually, through what must be exhaustion and extreme cold, he cuts first the hip strap, then the waist strap, finally the chest. Panting on the floor, at one end of the watery action painting he has created, he is free. 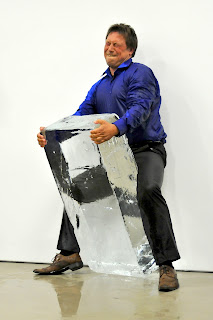 Dislodging the ice from the straps, Henningsen caresses it and pushes it towards the back wall. He takes a wide stance over the ice and it becomes clear that he is trying to lift it, to tilt it and make it stand up. It seems like an impossible task – 400 pounds of slippery wetness. He manages it in a he-man-performance-of-strength. Then, block upright, pushes it to the middle of the room. We can see it now, transformed by the cracks and ripples from the straps. A beautiful testimony. A landscape.

To complete his action Henningsen picks up the knife and fetches a bucket. Running his right hand across the ice he pulls a bottle of water out of the bucket with his left. Keeping one hand on the ice, he slowly pours the bottle out into the bucket. I can hear it crashing in the bucket and can't help but feel - as if in my bones, or in my blood - the contrast between the flowing water, the ease of it, and the bulky difficulty of water in its frozen, crystalline state.

[all images by Henry Chan]
Posted by Natalie S. Loveless at 8:00 PM