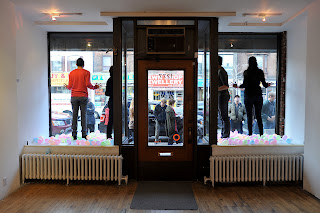 We are gathered outside, forbidden access. The storefront windows are dressed with pastel balloons. All four performers - Adriana Disman, Francisco-Fernando Granados, Helene Lefebvre, and Johnson Ngo - work together offering a ritualistic opening between performer, glass, and audience. At one point they all stand, hands and lips pressed to the glass. A bizarre performance art fish tank. Passers-by stop and join the crowd, unsure of what they are seeing. Time passes. They remain, manikin-like in the window. Gathering attention.
As we file in and take our places against the side walls of the gallery the performers move, slowly, mesmerizingly, to their starting places. In the far corner, Granados takes off his shoes and socks and faces the wall. He mashes his tongue against the wall, hard, until saliva is running down, leaving trails. Ngo kneels before a mound of rice and a clear glass bowl of water. Palms on knees. Waiting. He remains seated, impassive, until finally he reaches his hands into the bowl of water and slowly, oh so slowly, starts to rub them together. Then he plunges them into the pile of rice. Lifting his hands, he lets the rice pour out, slowly, leaving them gently coated in grains. Lefebvre and Disman remain up front, in the window, facing out into the street, staring at the passers-by with their faces, tongues, and lips smashed against the glass. A teenage woman stares at them, and seems delighted.
My attention descends, expanding into the details. I start hearing the muffled comments of folks outside, the grains of rice squeeking in Ngo’s fists as he throttles the handfuls before gently letting the grains fall back into the pile. Gently, hands facing in, hands facing out. Trying to let as many grains as possible fall before washing… there is something beautiful to the hands caked in rice and the sound of each grain falling. I notice that he is moving his gaze from person to person in the audience, keeping eye contact with each one for the length of his action. 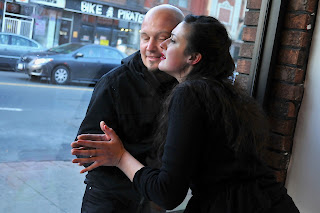 I look back to Lefebvre and Disman and see one passerby mirroring Lefebvre’s hands and another with his face mashed up against Disman’s. They stand and encounter each other, cheek to cheek through the glass.
My attention moves back to Granados, now maybe two feet closer to me. He has made his way very slowly across the wall with his tongue, leaving wet spots and saliva drips behind. A gesture drawing, white on white and perfectly ephemeral. His saliva glistens on the wall, its thickness providing texture, slowing the drip. I can’t help but think of the dirt he is gathering, of what these walls have seen. If performance is encounter, then this encounter is with duration, abjection, and the subtlety of detail. 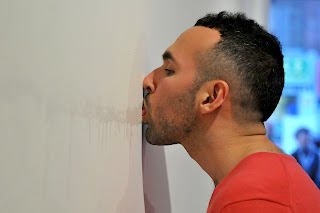 Tongue in and out. Tip to the wall then smashed into it. All the while saliva dripping like clear ink.
At one point either Lefebvre or Disman pop one of the balloons they have been sitting among and we all jump. Disman laughs loudly, forced. Fake. A sign for us more than a sign of mirth - surely designed to make us uncomfortable. Lefebvre and Disman, our attention on them now, lean back, each picks up a lipstick and, mirroring the other, applies a bright red shade. They smile – a grotesque clownlike gesture – and press their faces against the glass again. 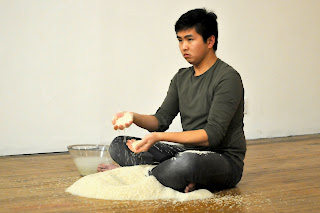 Meanwhile, Ngo’s action has slowly shifted. He is now sitting partially in the rice. He rinses his hands and digs them back into the grains of rice. He then starts to work the rice with his knees like a slow and partial snow angel. If performance is encounter, then this encounter is with monotony, and perseverance.
Well into the second hour of the performance I notice people getting in close to the performers: observing the detail of Granados’ tongue against the wall, the detail of Ngo’s hands dancing with the grains of sand. One person moves in to Ngo, hand out held in a request to join in with the rice action. I notice that people are also becoming more brazen with Lefebvre and Disman. One man is kissing Disman through the glass while another is pressed body to body with Lefebvre.
I go out for a moment to see what it looks like from outside. I am taken aback by the intensity of the solicitous gazes Lefebvre and Disman are offering the passers-by. Disman catches a young man’s eye, calls him up with a smile and frantically licks the face he presses against the glass. The outdoor audience laughs together. Disman sits back hardly visible through the fog of smeared lipstick. Lefebvre has an extended dance going with one of the conference organizers, hands up and down, side to side. Passersby keep stopping to ask what is going on. Some go inside. Following one back in I see that Granados has finished his tongue action, having taken something like 90 minutes to travel the length of the gallery. Now he is standing in a hunched contrapposto, staring into the middle of the room, the horizon line of his saliva almost completely evaporated, but still glistening a bit in the light of the gallery as it disappears to nothingness. He walks slowly across the gallery and returns to where he began, putting his socks and boots back on and leaving the space. Lefebvre and Disman move to standing. They make their way down and slowly leave the space following Granados. All eyes turn to Ngo and we listen again to grains falling, tapping against the floor, against his pants, against each other. With nothing else to look at all eyes are trained on his hands, twisting, loosening rice grains. Watching them drop one by one. No longer clear, the water in his bowl is white with rice flour. Ngo washes his hands one last time and ends as he began, with hands to knees in meditation pose.
Two hours have passed as we have observed the four artists at work. Together, these have been the results of a five-day workshop called Performance as Encounter, facilitated by Norwegian performance artist and educator Agnes Nedregard. Over the course of this durational action-based performance we have had ample time to contemplate the idea of performance as encounter. Performance as encounter with space, apparent in 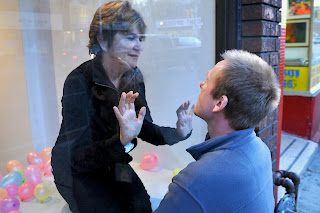 I'd love to get saliva from these people !