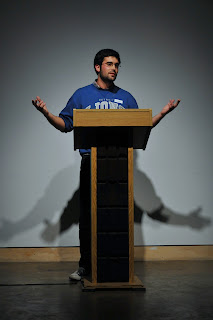 In the center of the gallery is a podium lit by a single spotlight. To the left is an open guitar case, guitar inside. Henry Adam Svec comes in and stands behind the podium, dressed in what I would call graduate student garb. Clearing his throat, he begins to lecture us.
The title of my presentation is “Songs Just For You.” Svec offers us a philosophical treatise on authenticity. He distinguishes authenticity from sincerity. He tells us that the authentic includes first and foremost debates about authenticity. He tells us many things about authenticity – assertions, arguments, propositions. Authenticity is always already commodified, Svec tells us. A little jocular. Off the cuff. Be aware of yourself recognizing authenticity, he says, and proceeds to offer a set of humorous binaries. Which one is authentic and which is not? Micky Mouse. Water. We laugh. He proceeds to categorize different types of authenticity, giving the example of being a waiter in an authentic way, in a way that is not just about the job but that is in some way both full and truthful. He talks about being a waiter in a way that reminds me of the 70s feminist performance group The Waitresses (co-founded by Jerri Allyn and Anne Gauldin in 1977) who constituted their waitressing as performance to transform their relation to their daily practice. Is it a lecture? Is it funny? Is it a performance send-up? Is it an implicit critique of authenticity in the context of performance art and its liveness?
I will show you authenticity, Svec says. How does one show authenticity? What is the form proper to authenticity? Like a lecture authenticity is pure content. He then turns to the guitar. Now I will sing songs. In what way will they be authentic? He gives us what seems like a Marxist proposition on unalienated labour, something that is in excess of the commodity form. In that spirit he tells us not only that has he refused his artist fee, but that he is not even who he says he is, and that this performance will never appear on his CV. Furthermore, he says, garnering a laugh, I'm not even enjoying myself! 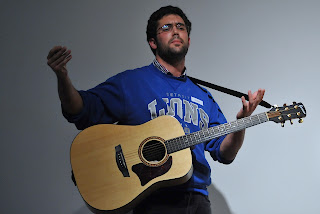 Svec begins to sing. He stops. I am not drawing your attention to the songs themselves, he says, I am not sure if the songs are authentic, I am bringing your attention to the singing of them. He sings a lonely song called “Don’t.” One line from the song stays with me – although he did tell me not to pay attention to the content: If you think this is just a game I am playing, if you don’t think I mean every word I am saying. The words might as well be a commentary by Svec, as I for one have oscillated between taking him seriously and taking the whole thing as a sly critique.

Svec sings another song, in a beautiful lanky voice, just so you won't be tempted to think that the first one meant something special, he says. Finished, he thanks us for listening and invites us to come and find him with questions.

[all photos by Henry Chan]
Posted by Natalie S. Loveless at 1:51 PM