Seven white pillows lie in a semi-circle, and a knife on each one. On the floor in the middle of the semi-circle, filled with black ink, is an aquarium. A red glove floats on top. Another aquarium is suspended from the ceiling upside-down, a little off center. 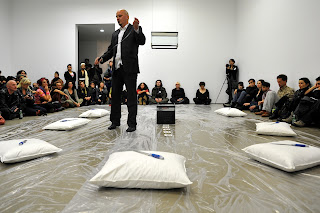 Walking in a circle around the space holding a red velvet bag, Meyer pulls out a square tile with the number 37 on it and puts it on the floor. Taking a few more steps, he puts another number on the floor, then a few more steps and another, and so on. Although the sequence of numbers he is pulling out is random, their placement is neither random nor at even intervals, but organized, perhaps, by the stochastic distribution of audience members on the floor around him. Then he starts organizing the numbers in groups. Rows of four numbers. Then a line of three. He finishes this number action by placing a final line of numbers on the floor alongside the ink-filled aquarium, then folding the red bag and putting it aside.

Suddenly Meyer pulls a belt tightly around his neck – I didn’t even realize it was there – and, turning red from the strain, starts to pull pieces of paper out of his jacket. The papers fall at even intervals around the circle, floating down: superbia, avaritia, luxuria, invidia, gula, ira, acedia. The seven deadly sins, and a pillow for each one - but which pillow is which sin, I cannot see. With all the sins in place, he removes the belt from his neck, hangs it on the suspended aquarium, takes off his jacket, and guts the first pillow diagonally from corner to corner. He then folds the back of it together and pushes the insides out. Like entrails, feathers erupt. Reaching into the ink-filled aquarium, Meyer takes out the glove, puts it on his right hand and raises it over his head in salute, black dripping down the arm of his dress shirt. After a pause he takes it off and puts it on the gutted feathers. 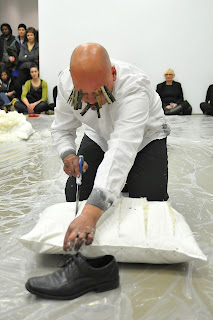 He proceeds to the next pillow, takes off his right shoe, and guts this one too – insides out in one fell swoop. From the aquarium he removes a set of clothespins attached to cardboard. Clipping three to each eyebrow and two on his lips, he places one on the pillow. The ritual is established: move to a pillow, remove a piece of clothing, stab the pillow, do something with an aquarium item and leave it on the pillow - or in its remains. Next pillow. The right sock this time. This one is gutted in a fetishistic ritual, a Seppuku of three strokes in a zig-zag across its surface. He gently shakes the feathers from the pillow and pulls a harmonica from the aquarium. After playing through clothespinned lips - slowly, painfully - he leaves the harmonica on the pillow. Left shoe. The fourth pillow dies with gentle slices. Out of the ink comes a ball of yarn. Slowly dripping, he holds the string over the next pillow creating a gentle gesture drawing, taking his left sock off and gutting the fifth pillow in the shape of a heart. And again to the aquarium. Out comes a scalpel. Cutting open the pocket of his shirt, he reveals a “7” taped to the skin over his heart. He shows this to the audience. Off come his pants, and the sixth pillow is cut in the shape of a cross. It is firmly shaken until everything comes out. Meyer stands now with feathers stuck to his half-naked body. From the aquarium he removes a deck of cards, scattering them over the remains of the sixth pillow. There is only one pillow left.

Wrath, greed, sloth, pride, lust, envy, gluttony. While each action clearly represents a sin, which sin fits which action is unclear. Is lust the pillow cut in the shape of a heart? Greed the deck of cards, envy the ball of yarn? Faced with the invitation to interpret a performance that hovers somewhere between enactment and exorcism, I find myself going along with its affect instead, with its ritualistic rhythm, its simple intensity. 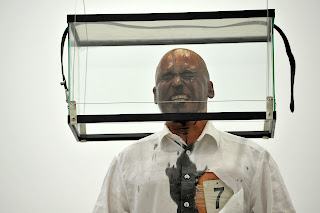 Continuing the ritual Meyer removes his briefs, revealing a number on his ass and another on his genitals. A single stab to the center of the final pillow and he turns back to the aquarium. Out comes a small roll of red electrical tape, with which he writes a backward Z on the floor with three six-inch lengths. All the pillows now gutted, he dunks his head in the aquarium, holding it there for as long as he can. He emerges from the ink with a grunt and then stands and places his head inside of the suspended aquarium, ink pouring down his face and body. From inside, he counts from one to seven in German, repeatedly and at top of lungs, his cry amplified by the bowl. Ink spitting against the glass, he gets more and more heated until a crescendo is reached and he stops, steps out from under the aquarium, and offers a little bow.

[all images by Henry Chan]