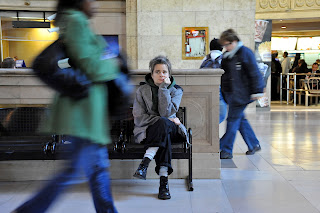 It is three thousand seven hundred and twenty-three minutes into Karen Spencer’s Sittin’ performance at Union Station. It is cold, and I am not the only one here. I recognize a festival-goer sitting with her. Together they gaze gently into the distance, in roughly the same direction, as if waiting for something or someone.

I know from having talked to Spencer earlier that her experience of the site has changed. One of the “Red Caps”, sitting in front of us, named Dan, introduced himself to her the other day, asking how she was doing and if she needed anything. Only in Canada, I think to myself, having recently moved back from the US. The drama I was waiting for finally arrived and it came in the form of a gentle query. No request to move on. No harsh what are you doing here and where is your ticket? Feeling somehow included in the formal social life of the station, no longer waiting for someone to notice and say something – perhaps to send her packing – Spencer is visibly more relaxed. Or at least it seems this way to me.

Spencer comes up and offers me her seat: it’s the best seat in the house, she says. I put aside my computer and just sit. At first I notice visual rhymes: two green bags, two yellow ones. But quickly, this time, possibly because of the set-up by Spencer, I find myself feeling more deeply rooted in the space. I'm reminded of a wonderful short story by Ursula K Le Guin called "The Direction of the Road". It is told from the perspective of an oak tree watching the world walk, gallop and drive by. Similarly, here, I feel like a node in the center of a world that is spinning at different speeds.

Today I am tired. Doing this bloging with a new baby at the breast has wrung me out -- its own form of durational performance. Even at a slight distance from the vents that blow just behind the row of chairs, I am chilled to the bone. I can feel it around my neck and creeping into my jaw. Nonetheless, sitting here with Spencer relaxes me. I let the rest of the world drift away and concentrate on the production of space. On inhabiting a thoroughfare. On experiencing architecture. On the subtleties of the intervention: sitting. A seemingly passive act rendered so very active in intensity.