Prelude: Identical twins enter from opposite sides of the space, meet in the middle with a ritualistic gesture, and begin the performance. Moving to separate video cameras that offer a live feed against the back wall, they each kneel and place a single hand before the camera. With the detailed view of the projection offering the enlarged palms of each performer, we are brought to mind of the individuality of a hand – the location of a fingerprint, the standard marker of individuality. Like that mirror game where two people stand in front of each other with neither in the lead or following but each trying to synch with the other, the hands play together. In this enlarged and distorted mirror-game the player’s gazes and presences are displaced and mediated by the camera-and-live-feed relay. I watch as two hands slowly move in concert. Two halves, a composite whole. And as I fall into the mesmerizing dance of these hands, a set of images flashes across them in rhythmic punctuation. It reminds me of a subliminal advertising campaign. Each image flashes just long enough to register but not long enough to read. The images are childhood pictures of the twins interspersed with iconic gender and gender-bending images: the queer in all shapes and sizes. 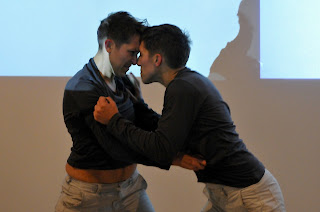 Act One: Identically dressed, the Tremblay sisters come together in the center of the space, perfect androgynous mirrors. They begin by hugging, closely. It is almost uncomfortable to watch. A little too intimate. Their hugging transforms into a mid-air game of twister. A game of trust. Leaning against each other, bending with each other’s weight, leaning as far as possible in one direction, then the next. Pushing balance to its limits – they offer us something between an incestuous embrace and the give and take of contact improv. At some point they seem like a single two-headed beast. Their movement turns into a kind of capoeira, and from there into a rough and tumble on the floor – brothers at play. Greek boys preparing for the Olympics. We are being asked to pay close attention to their writhing bodies, and the uncanniness of their twinness, as they fold into each other. Their wrestling becomes more heated. Their breathing becomes audible. The strain palpable. For a moment they come apart and each take a deep breath only to return, pushing forehead to forehead, then hand to hand – pushing with all their might as if into and away from each other at the same time. This is the final gesture of their first action.
Act Two: The performance now shifts to video and we are treated to a funny biographical interview starring each sister performing in character. They offer faux serious and funny reflections on themselves as artists. A kind of art-speak babble pastiche swiftly cutting from one liner to one liner that brings our attention squarely to the pedagogical theme of their piece: queer bodies, queer knowledge production. If we thought, in the first act, that the theme would be latent we are now disabused of that notion. 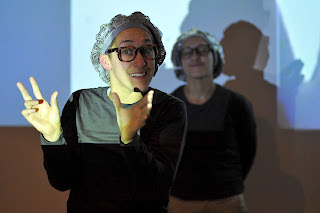 When the video ends the sisters don Groucho Marx style glasses and glittery silver hats and face the audience. They begin with another story, this time the story of the earthworm. The earthworm is a detritus, they tell us, excreting nutrient rich dirt. They give us a potted biological expose of this critter in the form of talking points and questions: Did you know that the earthworm is asexual? That to mate it simply sidles up to another earthworm, exchanges DNA, and then both can procreate? Did you know that if you cut an earthworm into pieces it doesn’t die? Does it, then, become two earthworms or is each part a clone of the other? As they talk to us images of (what I think are) worms under a microscope dance behind them.
Act Three: And then, with a smile, they switch gears again to finish with a bit of anecdotal theorizing. They offer a manifesto, a sermon denouncing not only heteronormativity but normativities of all kinds. This theoretically-informed manifesto is grounded in their biography, which they share – growing up in Southwestern Ontario, their emerging queer identities in the context of a small French farming community. They speak of the fetishization of their twinness and discuss the inescapable pull of sameness and difference that coloured their lives – the push to find small differences to distinguish one from the other: the pretty one / the ugly one, the smart one / the stupid one, etc. They cite feminist philosopher Judith Butler and her early work on gender performativity as the basis not only of their own work but of the world that they want to incite with it. Ending on this pedagogical note, the performance ties together their concern with the queer, with sameness and difference, with normativities of all kinds in a manifesto against gender norms that ends with a statistic: the rate of suicide among queer youth in Canada. One in Five.

Finale: Retreating from the oppressiveness of the statistical and back into the poetic, in a final gesture the sisters create a Bobby McFerrin-like soundscape together as they walk back to the cameras where they began and present their faces, this time moving them so close into the lenses that, in the projection, the two halves become one. Almost. 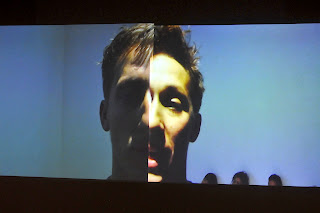 An oversized projection of an uncanny one-not-one face stares at us while the two performers harmonize their voices and end on a single note, leaving us to contemplate their unique blend of satirical lecturing, anecdotal theorizing, and performance intervention. Above all, to contemplate their poetic, evocative, interdisciplinary plea for a more heterogeneous world, at the level of gender performance and sexuality, yes, but even more so at the level of thought.
[all images by Henry Chan]

Curious presentation...If it's on youtube I'm sure I'll look it up. It's nice to see how you two have been since Tilbury. ;)
anything more to find?
Dean Paul Larsh
Kaufman, Texas