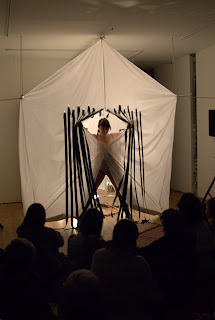 It is the second half of October in an even-numbered year, and therefore the bi-annual 7a*11d Performance Festival is almost upon us again in Toronto. In fact, co-sponsored events involving the performance festival and other umbrellas have already commenced.

On Thursday October 16th, FADO Performance Art Centre, a long-time associate of 7a*11d, teamed up with the 2008 imagineNATIVE festival to present êkâya-pâhkaci (don’t freeze up) by renowned artist Cheryl L’Hirondelle, at Toronto Free Gallery’s new location on Bloor Street West just east of Lansdowne. After a sizable crowd entered the gallery space and were encouraged to socialize among themselves, a performer’s shadow figure became visible behind a white tent or a screen. Mantric voices intoned ee-guy-uh-puck-a-chee, creating a ritualistic hypnotic drone which accompanied the performer’s skilful use of ghostly shadow motifs. L’Hirondelle played on audience expectations - that she would reveal something whether or not outside of her confinement - in a manner not unlike that of a seasoned burlesque performer. After all, burlesque artists are surely not-so-distant cousins of tricksters.

This was and was not a performance about barriers - performer/audience and more. Language might have initially seemed a barrier of sorts to those not in the know. I thought I was hearing German for more than a moment, but then surely not. (Actually, I was for a moment) But L’Hirondelle would enunciate language clearly so the audience could repeat language after her, and have fun doing so. An invitation was made to join the camp where her tent was pitched, so to speak. And she did quite nimbly clear a path for herself through the crowd, as a tall and proud dancer. Don’t freeze up in the face of an unknown, take a few deep breaths and inhale deeply.

The location was also quite interesting, if occasionally annoying. The audience had consented to be quite and listen, and storefront galleries are of course prone to street ambiences of varied dynamics. But this of course goes with the territory. 7a*11d will be deploying The Toronto Free Gallery and XPACE at 58 Ossington as prime locations. There will also be discreetly select outdoor activities. The 2008 edition of 7a*11d will include Creative Residencies by seven quite wildly varied Canadian and international artists. Let the games begin.