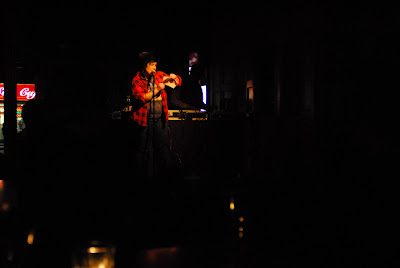 In her quest to become plant-like, this afternoon Sakiko Yamaoka performed the first action of a series entitled 'Wind from Sky' in a local flower shop, in which she set up a chair for herself and for any other participants who felt florally-inclined.
She commented that the experience was very surreal due the designed and artificial nature of the shop, and is interested to see how today's experience will compare to her outdoor action tomorrow at the corner of Queen West and Bellwoods Ave.

In a nice change of pace, the evening's video performances took place at the Gladstone Hotel. A longstanding tradition of 7a*11d, the d2d (direct to documentation) video show contained both deliberate video works and documentation of live performances that were unable to be held at the festival.

In my eye, of particular note were two pieces:
Enrico Gaido's and Alessandra Lappano's piece entitled 'New Orleans', in which the performer within the video is using styrofoam blocks to create a city-like structure in a performance akin to an IQ test gone awry. The shift in perspective at the end of the video lends a sense that something isn't quite right as all the pieces have been pulled away (seemingly by magic) from the table to land in a pool of water. As the camera zooms out, the viewer is left wondering which direction is up and how gravity has been defied.

In a completely different tone, Jess Dobkin's piece 'untitled (clown car)' brings new meaning to the phrase "like someone let out a clown car." With a concept involving a cardboard cut-out of a car held in front of a vagina full of tampon-esque clowns, the joke practically writes itself in a wickedly irreverent way. The attention to detail in rendering each clown with a different facial expression and costume is especially hilarious as clown after clown appears. In a world inundated with identity and gender politics, it's refreshing to see a woman having fun exploring the possibilities of her genitalia.

Live performances also took place tonight, as Ulysses Castellanos, of Sunday's 'Clown Torture Revisited' fame was a DJ for the night, and a guerilla action by Leanne Lloyd occurred across the space of the Gladstone. Lloyd, dressed in a beautiful costume woven out of white wool and straw, performed a series of endurance actions that both compelled and denied interaction.


Things return back to normal tomorrow with the regular 8PM performance at XPACE. As well, at 12PM Sakiko Yamaoka will be performing another plant action, as mentioned above, and Gustavo Alvarez (Musgus) will be performing at 4PM outside Osgoode subway station (the side closest to the opera hall).

~Elaine
Posted by 7a*11d International Festival of Performance Art at 1:10 AM