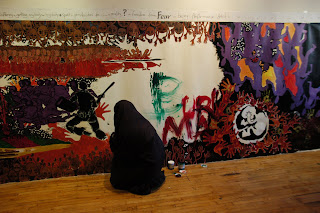 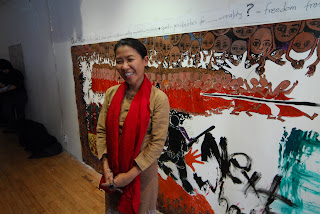 Chaw Ei Thein: From the Outside

Her mural, Quiet River, has developed a lot of depth since the last time I have seen it. The faces bordering the image all have eyes and noses (and, pointedly, no mouths). They have ears on their outstretched hands, reaching to listen in on the events happening in the centre of the mural. The line of monks has become a crowd, and scenes of riot police have emerged. Any blank space is being filled in with beckoning, imploring handprints and eyes peering from the blackness.

For Chaw Ei the political has always been a part of her work, for when one's daily life is a struggle for freedom, themes of politics and of activism become inseparable from art. In her performance she holds a positive tone despite the harsh images depicted on the canvas, hoping that she is able to influence change in Toronto, if not in Burma. Her goal is to create discourse and discussion amongst her audience, to give them insight into the lives of the Burmese people while at the same time learning about local disputes with freedom.

Her current position outside the struggle is one that she hopes to use to good effect, noting that when inside a situation as oppressive as Burma's, where even basic life is constrained, it is often difficult to see a way out. When solutions have been tried and failed, it is difficult to move on. From the outside, she feels she is able to gain perspective by seeking out others' points of view, and able to learn from others' dealings with human rights issues and lost freedoms. From here, she can contact her audience directly, she can create physical connections, she can speak, she can inform.

Access to her audience is a crucial point of her art. As such, the work that she can do from the outside is important. Chaw Ei explains that before 1988, no one really knew about the situation in Burma. It was only after a series of campaigns that international awareness slowly grew, although even now, it is still largely an issue not given wide regard. But here in Toronto, she can spread the news to locals, to all the people affected by the festival and all the people in the community that have come to speak with her. Her perspective right now is that even if she can't find a solution, then at least she can share her her experience with the people; she can show them what it is to fear, and what it is to have freedom.

When I asked her how this piece would be different if it took place in Burma, she responded quickly: it would be impossible. She would be arrested and perhaps kept in prison indefinitely. If she had been secretive, showing the work only to friends and family, any media reports (including this innocuous blog post) would make her unsafe. In May 2005, Chaw Ei, co-performer Htein Lin and three others in their group were arrested for a public performance in a Yangon market, selling daily necessities and paintings at cheap prices, a performance that critiqued the government's unreasonable inflation. Even working outside of Burma, she felt for quite some time that she was not free to create, as the weight of censorship and caution followed her like a shadow. Until very recently she was concerned about her safety upon her return to Burma if she was making these critical, political performances internationally. She never met with media, and she felt herself not expressing as much as she could. But now, she has made a choice: she must do something. She is no longer concerned with censoring herself.

Whatever repercussions she may face in the future, she is willing to face. She does wish to go home, of course. But for the time being, while she still has recourse to create and work in the outside world, she will. When the day comes that her papers and passports expire, she will return to Burma. For Chaw Ei, although optimistic about her abilities to spread her words and performances, is under no delusions of the strength of her impact from the outside. She can see both sides of the equation, for although perspectives and audiences can be reached from the outside, one cannot always affect those left inside. Revolution, she feels, must come from inside, where once can truly touch and affect those directly underneath the shadow of the military junta. The difficulty, there, comes not from desire or intention, but from inability to create.

She and many others are living in this situation. Even if she travels to different countries, there is no escaping it. She has received many visitors from the Burmese community in Toronto, and for of them, the events that have happened in the past still affect them as if it were yesterday. This art, these works, spring from the physical experience that she cannot forget. Although hopeful, this quiet river is not a peaceful river. A river once bustling with promise that is now forced to keep silent. But the river carries along its banks ideals and dreams of hope.