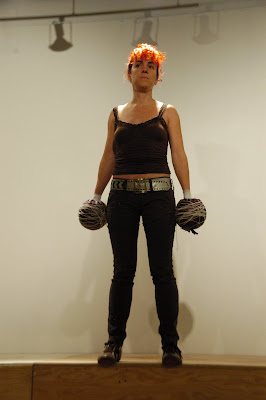 Above photo of Sylvette Babin by Henry Chan. 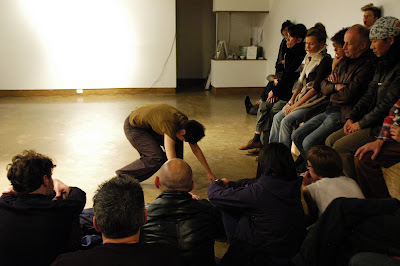 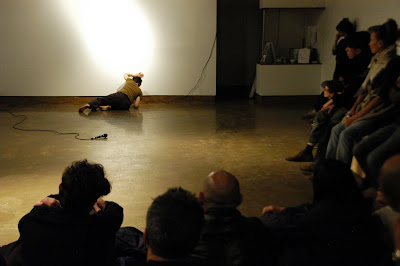 'Raaka - Raw', the movement-based exploration of Pia Lindy, was at turns reaching, grasping, supporting, supplicating, drawing in, offering, rejecting, withdrawing, essentializing and more. Using sparse spoken text to provide context, she presented us with a concept of movement that focused on a series of sustained still images that flowed into and out of each other.

Below photo of Pia Lindy by Henry Chan: 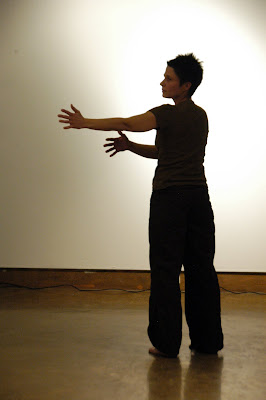 Lindy framed our perspective through an emphasis on the durationality and the effort of movement rather than the end result -- the goal -- of the movements themselves, making visible that which is not normally seen. The act of choosing one motion is also the act of not-choosing an infinite number of other motions. And while usually these not-chosen possibilities are not seen, not recognized as valid expressions, Lindy offered up these not-motions as stepping point for us to recognize the dichotomies in our own lives and identities. Dichotomies that do not allow any grey space, that force us into either/or, that terrify and isolate us without us even realizing it. Our identities are just as much made up by our not-choices as our choices. Even more so, in fact, as culture shapes identity through things that we cannot choose, cannot change. Through still motions and active not-motions, Lindy allows us to realize just how stifling the dichotomies have become. 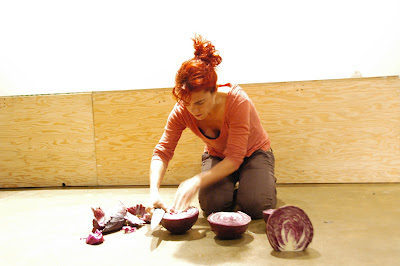 Above photo of Sylvette Babin by Henry Chan.
The final performance of the night was by creative resident Sylvette Babin, who challenged the absurd by presenting us an action in four (and possibly five) senses. Kneeling on the floor, she began her performance with the careful cutting of two red cabbages, carving out their hearts to make room for her fists. She was creating boxing gloves that were tied to her fists with twine.
Once ready, Babin stood upon the edge of her platform, and presented us with a traditional song of New France, A la Claire Fontaine, a morale-raising song used by troops of revolution. When the clear notes had fallen silent, she turned to the wall and began pummeling it with her cabbage gloves. At the same time, she pushed her body into song. As she progressed, battered blue cabbage-blood stains spread across the wall, and the smell of bruised cabbage mingled in the air with Babin's voice as it strained to push past physical exertion. The chorus, Il y a longtemps que je t'aime // Jamais je ne t'oublierai (So long I've been loving you // I will never forget you) was underscored by the thudding of the cabbages and the panting of caught breath. 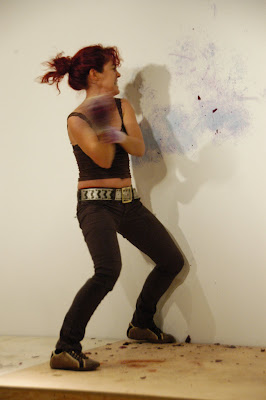 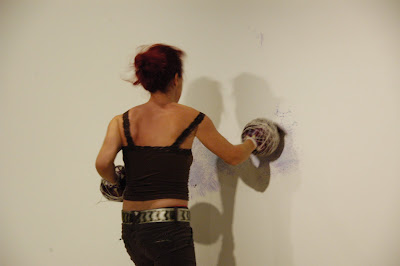 Above photos of Sylvette Babin by Henry Chan.
She offered insight into the many layers of the performance: politically, a comment on violence and war; culturally, a challenge of prescribed gender roles in the contrast between preparing cabbage in order to cook it, and preparing cabbage in order to box with it. But what she would like to highlight is that the piece is a sound performance. In addition to the physical and visual impact of the piece, she is interested in the audible effects of action on the voice, and strove to make the act something difficult for herself, to push the body and hear how the body is transformed by action and emotion.


We look forward to seeing you today at the Free Gallery for Chaw Ei Thein's ongoing performance 'Quiet River', as well as for Simia Civelek's 'Black box'.
Tonight at XPACE, Mahan Javadi is heading up performances at 6PM, and John G. Boehme, Alejandra Herrera, József R. Juhász and Norbert Klassen will continue at 8.