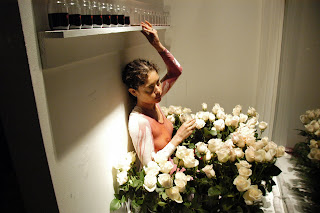 Photos of Alejandra Herrera (above) and Norbert Klassen (below) by Henry Chan. 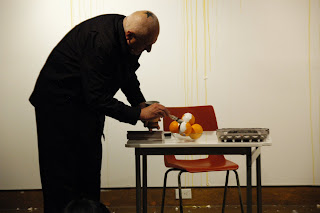 Upon arriving at Xpace tonight there was a different installation in the street window. A row of wine glasses, a row of lettered glasses spelling out LA SANGRA TIRA, and a third bottom row of empty glasses. A performer - Alejandra Herrera - struck a pose in the centre frame. She was commencing a durational performance in the gallery window, one that an audience would return and return to and one that might well have been curious to other pedestrians.

A note on the gallery door directed people to a lot behind the nearly-adjacent Queen West Storage building. In the lot, artist Mahan Javadi has assembled an assembly of personal artefacts, canvasses, and significant belongings. His Project Zero: Space addressed efficiency and control. In an attempt to radically get rid of useless excess and bad memories and more, the artist intended to destroy fifty percent of the pile and scatter the remaining half to the winds or whatever. He had some good art books and other interesting objects among his garbage.
Photo of Mahan Javadi by Henry Chan: 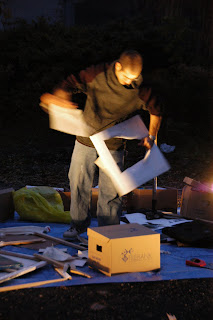 As Alejandra Herrera drank more wine and began to lower her body in the window, a performance by Norbert Klassen commenced. Klassen had very successfully entertained me on the previous evening; so what would he do tonight? Would he attempt to top his most recent achievement? Since he had sold artefacts of his detritus and then burned the money in an outrageous fuck you note to art market etiquette and protocol, would be adding further insult to the polite surfaces of art and performer/audience exchange systems?

Well, yes and no. Tonight Norbert Klassen set up a simple kitchen table, hosting a fruit bowl containing an orange, a twelve-crate of eggs, and a pair of hammers. The performer entered back to audience and threw an egg against the white wall, creating yellow Pollock drips that remained on the wall for the entire evening. Then he sat down and played with two hammers - hitting one against the other. He did this in a military four four rhythm - Hep two three four for quite some time until he stopped on the two beat and held the pose. Then it was time to eat the orange.

Norbert ate the orange in something beyond real time - chewing for ages between bites. He kept attention here as a good performer can and should. Although he has (and does) worked in theatre, this was not so much good acting as simply great presence and purpose. Good performers can convince audiences that there is something happening beyond the everyday while simultaneously paying extreme attention to the everyday. Self-conscious and intelligent humans are also perfectly aware that eating is an action, a ritual, a performance.

The performer finished the orange, stared, and then barked out a series of declamatory commanding sounds. He pushed a crate around the table, making horrible industrial sounds alternating with scraping. He took a bottle of water from the red crate and peed with it. Then, after three more egg-related actions, he began painting on the oranges. First white, then black. Then the finished art works into the fruit bowl, which resembled a what’s wrong with this picture variation of a classical still-life.

Then the performer began to speak. He read from a series of cue-cards. What he read were directions for creating acceptable due to clichéd precedent performance pieces. “Explain Fluxus in five minutes or less, using simple props”, and so on. He read through several such instructions, and they were funny because the were accurate. They also bore considerable resemblance to his series of actions during the last at least half hour.

But then… more food. A vegetable this time - a lettuce. And why a lettuce? Because it is the most explosive of foods. One firecracker and a big bang. Thank you, Norbert.

As Norbert’s set and mess were struck, it was time to go outside and see Alejandra Herrera who now had wine dripping down from her mouth past her chin and onto her wardrobe and more. The Blood Pulls, The Blood Drips, The Blood. More blood and more wine.

It was now time for another downstairs performance, as there has been one every night. (Why not, as it’s a great space for those with spatial talent and vision.) Tonight’s basement performer was Jozsef R. Juhasz of the Slovak Republic, and his piece was titled A Possible Past. He awaited the audience in nothing more than a black jockstrap - he looked like a man who could mix business and pleasure. He had a pile of flour on a checkerboard table - something was up. Flour has, during this 7a*11d Festival, become some sort of trouble signifier.

And something was up. The performer cordially announced that he would be combining sound and pictures. Two film projections were involved, both from the same studio in the early days of magical moving pictures - the late nineteenth century. The first film was the durable proto-beefcake movie by Thomas Edison (the madcap inventor himself) - Sandow the Strongman. In tandem with Edison’s rather breathtaking voiceover, Juhasz semi-mimicked the film’s choreography, wearing nothing lese but the jockey shorts. Then he put on black clothing and another film- an early silent called The Kiss which featured the first man/woman kiss in celluloid history. A loop of the actress Sarah Bernhard sounded hilariously incongruous with the extended smooch. 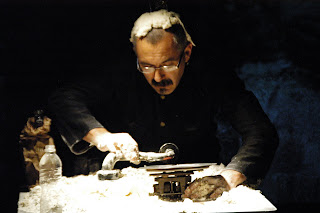 Above photo of Jozsef R. Juhasz by Henry Chan.
Then the performer began to mix the flour with increasing abandon, like a kid playing with an ever-expanding sandbox. He not only mixed the flour on the table, he smeared it onto his head. Perhaps the mad scientist was putting on his thinking cap? Meanwhile, Sarah Bernhardt made way for an old-school 78 RPM record player and an appropriate 78 RPM record. Welcome to the roaring twenties, the Jazz Age and all that is big wonderful and modern. Actually the record was Clink, Clink, and Drink, by Spike Jones. The mad scientist also drank - there was a lot of drinking this evening, come to think of it. And the basement is the traditional laboratory site for the mad scientist. Or, at least the charming but somewhat dangerous uncle.

The next performance was by John G. Boehme of Victoria B.C. He walked over to an ironing board and began ironing a yellow dress shirt; He did this in at least real time. He produced a tie from his clothes basket but didn’t put it on yet. His outfit was business conservative. He wore suit pants. He was on a mission - to be a leading man, a player or a candidate? He was about to put the tie on, but no. He produced two ribbons and attached them to his lower chest, causing his rather large body to expand further. He was about to put the tie on, then he stopped.
Photo of John G. Boehme by Henry Chan: 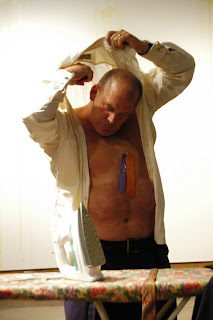 The man didn’t smell right. He spritzed cologne (colgnizing himself?) not only in the usual places but all over his entire top body and on his very shirt. He spritzed underneath his appallingly goofy under shorts. He smelled fresh enough for at least a week’s excursion to Lord Knows Where. His intention was to mark territory. Then he tied the tie and donned the full suit. He was ready to make the rounds, to work the room.

Which he did. Armed with a roll of name tags, Boehme approached a man seated apart from the rest of the audience and asked the man if he could carry him. The man consented, they traversed the circle of the gallery, and then they exchanged names and agreed to be friends, parting company after the performer or candidate provided a mint. Then Boehme made a smiling approach to another audience member, this time a woman. Again around the circle and the same exchange process/system. It quickly became apparent that he was going to do this with everybody in the room, for the duration of the duration. He was going to carry the entire audience - the entire “community”.

Audience members became restless. Many didn’t want to be carried away, but they consented anyway. One or two didn’t. The performer did not challenge these naysayers. He was too smart a performer - too smart a politician - to make mountains out of molehills. For John G. Boehme did indeed resemble an insecure Republican senator (courtesy of my blogging colleague Elaine Wong) with an unbearable need to be loved. And he did make himself rather lovable, despite the suit and despite the overbearing colognization of the environment. After working the entire room, Boehme rolled out the roll of unused name tags, changed his shirt and shoes, and left smiling. He earned a big round of applause, a big round of applause for a big man indeed.

At the end of the evening, I was informed that Mahan Javadi’s performance had been stopped by the Fire Department and The Police. A neighbour had complained about the fire resulting from the burning paper and other garbage. The authorities, to their credit, quickly realized that they had been summoned to a performance. How could this not be a performance? After all, something was burning.
Posted by 7a*11d International Festival of Performance Art at 3:43 PM