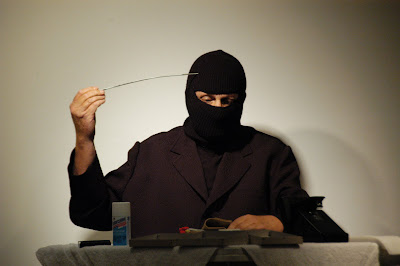 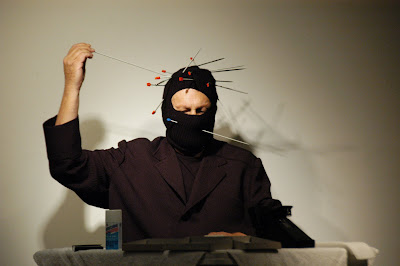 Photos (above) of Norbert Klassen by Henry Chan.
Walking down Ossington Avenue, I approach the Xpace Cultural Centre and immediately perceive an art object in the window. This is a change from the previous evening, but then the object was created that previous evening. Joost Nieuwenburg’s Mattress of Vertical Matches, perhaps? It is the mat or rug or surface walked upon in this artist’s performance Two surfaces in contact, and the artist’s walking inevitably produced flares and then fire. Burning leaves traces, and traces form ghostly figures and thus art-objects. Performance art often tends to follow this trajectory.

As an audience begins to enter the gallery itself after registering the window display, the previous evening’s all-purpose platform or podium is now set up at the far end of the gallery, the end furthest from the window and the entrance. There is a table on the raised surface, and there is a Polaroid camera and various other paraphernalia on that table. There is in fact a theatrical set, waiting for the performer.

The performer’s name is Norbert Klassen, who makes himself comfortable and then dons a black mask covering all but his eyes. He then proceeds to stick acupuncture needles through the mask - talking a self-Polaroid for each needle. He creates quite a mask by inserting at least several needles. Then he pulls off the mask and begins inserting smaller needles into the sides of his face. He retrieves the needles and collects them into a relatively small plastic container. 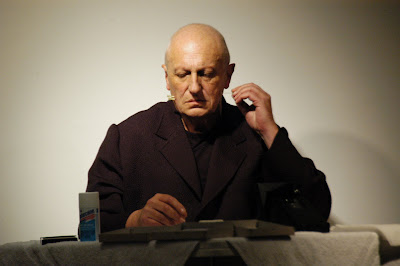 Above photo of Norbert Klassen by Henry Chan.
Now Norbert removes his jacket and reveals a sleeveless black pullover. He begins cutting himself near the top of his left arm - cutting himself in order to spell out letters. The letters are A, R, and T - the word is ART. He stops the bleeding, wrapping gauze over the cuts and then saving other pieces of gauze for his personal containers. The Polaroids are also dutifully placed into the containers as are the smaller needles. He requires and thus assembles three containers, thus creating multiples. This is a man, not unlike many other performers who have already presented themselves at the 2008 7a*11d Festival, who is more than willing to bleed for his art.

But then he begins to talk directly to his audience. He asks what might art be, and cites Warhol’s definition as the only credible definition. Warhol of course defined art as what sells. So Norbert puts art-objects up for sale. Like many performance artists, there is a delightful ambiguity as to whether it is the performer‘s residue or the performer his/herself which/who is the commodity. Norbert Klassen, for his part, played auctioneer, placing not one but three boxed editions of his instruments and their by-products up on the market. Despite their instant sales for very low prices indeed, I could easily imagine Damien Hirst himself smiling approvingly, as well as Warhol. Bypassing the dealers and selling directly to “the public” is both anarchic and hyper-capitalist. 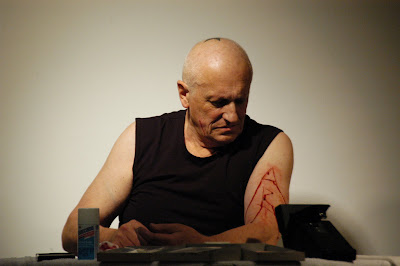 Above photo of Norbert Klassen by Henry Chan.
However, leave it to Norbert Klassen to poke further ridicule at absurdist art markets. He now asked the buyer of Multiple Number One (who happened to be performance art curator/impresario Paul Couillard) what price he would now re-sell the art object for. Couillard kept the reverse bidding going and going and did not let go of either his pride or the multiple itself - he played the collector prioritizing his collection over his wallet. This anti-bartering went on until it became clear that the impasse would eternally remain an impasse - that a plastic container of Norbert Klassen’s performance art paraphernalia and/or debris was indeed a valuable art object well beyond the banalities of whatever might be its sales value.

The festival’s second night offered another downstairs performance, down in that eternally ripe basement. Risa Kusumoto presented a half-hour performance titled Forget Me Not. Her performance was indeed unforgettable - it was visually striking well before she herself entered the frame. Kusumoto had designed a haunting set with extremely thin strings hanging from the ceiling and surrounding what appeared to be a furnace-like structure covered with gaffer tape. There was also a telephone at the right (audience left) down stage.
Below photos of Risa Kusumoto by Henry Chan. 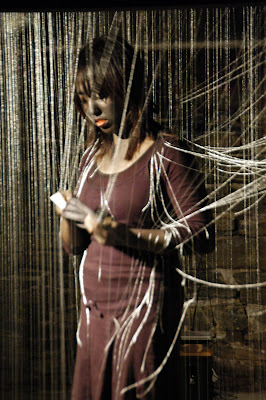 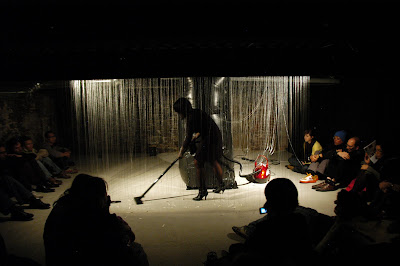 Audio was introduced prior to the performer’s entrance - steadily falling rain with occasional rumbles of thunder. Rain and thunder are horror movie commonplaces - pattering rain nags the mind while thunder can provide a jolt. But this performer‘s thunder was more subtle. Kusumoto entered, wearing what appeared to be black shading makeup on her face, walked through the set, and then proceeded to record the names of every audience member. She would write their names down on white paper slips. This of course took a while, but she needed to do it. Then she scattered the slips onto the floor before retrieving a vacuum cleaner placed behind the column. She vacuumed the floor, seemingly oblivious to the fact that vacuum cleaners tend to reject paper and similar scraps. While vacuuming, she attempted to match faces with names, and to remember the names. Her voice was wavering or quavering or quivering - it was precarious and disturbing.

The column was beginning to shrink, and it became clear that it was a construction of green plastic garbage bags. The size of the bag sculpture shrank as its tangible contents also shrank. What initially seemed there really wasn’t there. But the bag swelled up again. Memories are memories because they come and go and then return.
Below photo of Risa Kusumoto by Henry Chan. 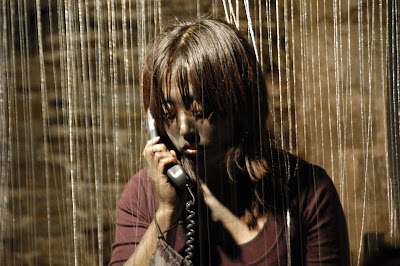 And the phone did get used, just like it gets used in all good horror and suspense movies. The phone call was made by the artist to her grandmother, and a conversation did take place. Then the performer left the set, although several audience members felt the need to walk through that very same set. Ghostliness will eternally be attractive and also seductive.
Posted by 7a*11d International Festival of Performance Art at 12:45 PM