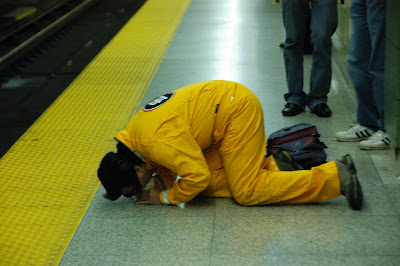 After enjoying a delightful tea with the performance artist Norbert Klassen, we trudged off to the subway entrance at Queen and University by the big shiny new opera house. I had hopped that Gustavo Alvarez was intending to perform one of his public actions in relation to the opera house, but it was into the subway that Gustavo and his portable audience entered.

Gustavo (Chabochi) retrieved a loaf of bread, with flamboyant pink icing forming facial images on top of the bread. He lay the bread/head down and began eating it - holding the loaf with his hands but not picking it up with his hands and then eating it. He ate like an animal - a dog perhaps or maybe a belly-dancer. He wore his signature yellow boiler-suit with no head gear today. After taking bites out of the loaf from both sides (and letting at least one train pass the platform) he got on the train and the performance-paparazzi followed. 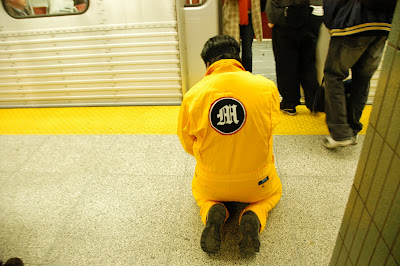 Suddenly Chabochi got off the subway train at the next station north - St. Patrick - and, as his followers followed him, he got on the next car before they/we could get on the next car. But he had informed Johanna Householder that his destination was the Museum station, with its hello we are now approaching the museum kitsch subway decorations - its “public art”. In this station, he placed the by now well-eaten head of bread onto the floor, knelt as if praying before it, and then resumed eating. Crumbs were by now accumulating in considerable quantity.

The artist began hanging black and orange plastic shields with shaped holes (some faces) around one of the station’s altars or museum-referent poles. The black and orange shields or flags appeared to have been purchased in some cheap Halloween-supplies store. Halloween or Sam Hain - Days of the Dead. The artist reached into his supplies-bag and retrieved first one small clay head sculpture, and then another. He placed the two heads on a black blanket, and retrieved twelve candles, which he spread about in the shape of a corpus. He scattered crumbs in order to provice flesh. He addressed the air and thus the commuters:

Commuters were stopping and wondering what was going on. Most stared for a bit and then moved on. One couple asked me if the man was all right and should they call 911. I informed this couple that calling 911 would not be a good idea, and I used the words “performance art”. They seemed okay with that. 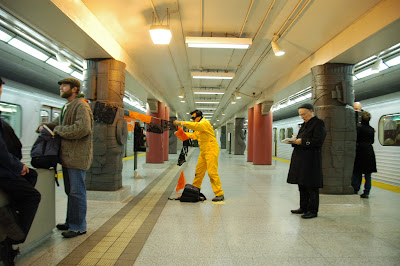 Gustavo Alvarez MusGus finished his meal and inspected his installation. He left it on the platform. Of course the 7a*11d contingent was documenting the performance evidence, but so was one stranger. Yes, the wonderful convenience of digital cameras and other modern technologies. Photographs preserve traces of events, and they also document the dead. Gustavo Alvarez will be performing at Xpace on November first, the day after Halloween and the Mexican Day of the Dead.

The evening’s programme at Xpace involved duration, options of continuing, formation of images, and a lot more. Serbian artist Nenad Bogdanovic presented Seventh situation for a nicer painting. A canvas was suspended on four support strings stretched across the gallery, each corner held by an artist-participant. Bogdanovic retrieved his squeezable paint-tubes one by one and made a word painting. N in black, I in green, C in red, E in yellow, and R in black. NICER. Then he ate an apple and then appeared to brush his teeth with something mysterious. Whatever the toothpaste was, it permitted him to spit out a fluid onto the canvas, adding drips and another layer of paint and smudges and artistic whatevers. Bogdanovic repeated this process with different foods, liquids, and stimulants (a chocolate bar, a banana, an entire bottle of Coca-Cola, and a cigarette, and more). He was able to spit out different colours. Actually quite impressive.

I thought he was going to keep spitting out paint/fluid until the word NICER had become completely abstracted. I did think of the infamous provocateur Jubal Brown, who once declared that Mondrian could benefit from another colour and thus vomited blue food colour onto a Mondrian canvas at the Art Gallery of Ontario. I also found myself remembering the Australian movie Man of Flowers, in which a “painter” snorts copious cocaine, spray-paints a multitude of colours on a canvas, rolls his girlfriend’s dog over the wet canvas, and then declared the finished work a masterpiece. Sure enough, after guaranteeing that the canvas was dripping and overflowing enough, Bogdanovic pressed his boy against the work-in-progress and revelled in the paint. He converted dripping paint into actually rather restrained smudges. He made a painting, and then took his art-work away with him. Off to the market, perhaps? Or at least to a dealer? I did wonder whether or not the artist would attempt to sell his latest painting.

There were no performances in the dungeon or basement this particular evening, but there was a short projected film by performance artist Robin Poitras. The black and white film was titled XO Skeleton, and it was appropriately titled. The dancer/performer wore black leotards visible underneath a white garment designed to accentuate the artist’s bone structure - designed to accentuate her stretches and contractions and contortions. And Poitras is a very good dancer who can twist her body into many different shapes - she is nothing if not elastic. Poitras performed a very different piece at the end of the evening’s programme, but that piece also involved stretching and contacting and serious concentration.

Gdansk-based artist Angelika Fojtuch’s untitled performance began quite out of the blue. I had been chatting with friends when suddenly I noticed 7a*11d committee members documenting something happening on the floor, against a table containing empty beer bottles and food trays. Angelika Fojtuch was wrapping audience-member Thom Sevalrud’s feet around her feet, with shards of white gauze or bandage. (One of my favourite typing mistakes already enters into play here - bandage/bondage). She kept wrapping and wrapping, and Thom was stoic and good-humoured. Up the legs, around the waists, around the chests, and the upper torsos, and the heads. She wrapped bandages around Thom’s neck and blindfolded herself. The two walked slowly - very slowly. They stopped against a wall, where more and more wrapping continued and continued. Audience members began to applaud and still Angelika kept wrapping. Well, why wouldn’t she? Until death do us part and all the rest of the ceremony, it’s known as commitment and also consent. I did think of Linda Montano’s and Tehching Hsieh’s One Year Performance (1983-84), in which the pair was bound together by an eight foot rope for a year on condition that they never touch. Well…Angelika and Thom were literally bounded and gagged to one another. They were, I believe, married. But eventually it became time (an arbitrary time) for Thom to be permitted to cut the bandages (the umbilical cord?) and then take the active role in de-blindfolding Angelika. The pair was introduced to each other, which was nice considering they were now free to get divorced.

Robin Poitras, the evening’s final performer, has also been one of the Seven Creative Residents who were being encouraged to develop and then present performance pieces in response to their working and living environments. The festival catalogue lists Poitras as presenting untitled: a work that draws on past works. Well, yes, that is true. But this performance was so much more than that.

As the audience re-entered the gallery, Poitras was on a ladder with a roller against a white wall. What was on the roller was honey. Sweet and very sticky honey. She was painting the letter “X”. In the centre of the gallery she had a bucket and a pair of stilts. Very simple - minimal and particular materials and/or supports.

She came down from the ladder, sat in the middle of the floor, raised the bucket and poured homey all over herself. It ran down her entire body and formed a major puddle on the floor. She remained still and never looked at the X that she had “painted” on the wall to her left. She slowly rose and mounted the stilts. She moved backwards through the puddle of honey and very slowly but steadily around the playing area she had defined, maintaining the necessarily perfect balance. She stopped in the centre by the puddle of honey and slowly climbed down from the stilts. She lay the stilts down, and walked slowly toward the wall to her right. Robin Poitras pressed a hand against this wall, and held it there. Then she withdrew the hand, revealing one very clear fingerprint. Then she exited. Her timing was perfect, as was her concentration. This was not a performance that could have lasted forever and ever. This was a performance that moved from here to here to here to there, and did not waste a second doing so. It had something to do, and it did it.
Posted by 7a*11d International Festival of Performance Art at 1:28 PM