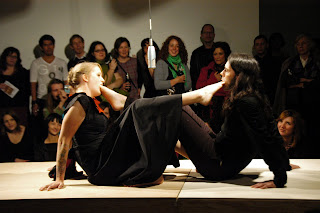 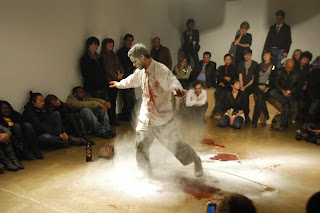 When I arrive at Xpace, there are already a lot of people there and there will be a great many more. Nearly 200 people in that somewhat small gallery - that gallery plus its classical basement. How is this opening night going to proceed, and how will it be (stage) managed?

Almost seamlessly, it transpired. I knew that Warren Arcand’s Nosferanook was intended for the basement, so who would go first? And there was a buzz about another performer - an addition to the programme. Well, surely he or she wouldn’t be the first act. So I look around the gallery. I see a platform with an overheard mike hanging, and I see two chairs a body’s length apart from one another. And then there is this blue cushion with a body positioning itself between the two chairs, with arms and legs reaching and even kicking out? Well, no it’s not a cushion. But the body inside the capsule attempts to do things but it’s stymied due to confinement. The audience watches the arms and the legs attempting to rise up, but this is not even a teaser. Tho audience chat among themselves.

The audience is in instructed to arrange itself in favour of two performers who are now on the platform. It’s a girl and a boy - Stacey Sproule and Randy Gagne. They lie down and put a foot in the other’s mouth - literally. The mike hangs overhead as they sing excerpts of familiar pop love songs. I recognize I Think We’re Alone Now and Total Eclipse of the Heart. Real schmaltz tunes. Randy’s closer to the tunes than Stacey, but they both have the other’s foot in their mouth so there we go. Sonny and Cher for the 21st century. Then they stand, they smooch, and both sing How Deep is Your Love by the Bee Gees. Very deep indeed, it seems. As the song peters out, the vocalizing becomes abstract, almost sound poetry. I like this, since love is abstract and not verbal.

After Stacey and Randy conclude their serenading, the blue capsule is now on the platform and it contains Will Kwan as Dr.V. And the V is short for…Viagra! And Dr.V. is now going to make like Istvan Kantor/Monty Cantsin and the Machine Sex Group and hump these filing cabinets. Well, I mean Viagra combined with inanimate objects - you can go forever with that combination. Dr.V sticks it in from every angle, just like in a good porno movie. He stops because he is satisfied, not because he is exhausted. The audience has recognized the parody/homage/piss take and there are great gusts of laughter. This performance was in fact titled Dr.V does the classics.

Now it is time for Nosferanook, but the crowd has to be divided in to three for capacity etcetera reasons. I get to be part of the second instalment. The basement is danky with minimal lighting, a halfway path is cleared and a big ghostly owl enters. The owl makes an extended entrance - perhaps he has been losing blood? The owl carries an axe or knife or a weapon - he eventually stands before the wall and begins swinging. The blunt instrument leaves marks in the wall and some chips fall out, but only chips. He keeps swinging and swinging, marking territory but not making headway. It becomes evident that he is going to do this for duration, and audience members are advised that they can leave whenever they wish to. Many audience members stay. Maybe there is more, maybe the image and the performance has established its own space and time and not everybody is in a rush to leave. In conversation about his working process during his residency, Warren Arcand mentioned the owl and the underworld netherworld of the warring gods and also a Rolling Stones song - Can’t You Hear Me Knocking - as threads he was working with, intending to stitch them into a tightly composed performance, along with the owl’s costume he was sewing and which he wore to striking effect. And these strands were all present in Arcand‘s performance; they became condensed and stripped down. Yes, the owl was knock knock knocking, on a door which no one was answering and on a long-standing barrier or wall. And it would take forever and forever to knock the wall down, but still one must keep on knocking, even when one can’t come in.

Back upstairs, what looked like a red mat or carpet had been laid out more or less where the platform had been. The Dutch artist Joost Nieuwenburg walked around this carpet or rug for a while until he sparked a brief flare below his feet. Then another flare, and another and another as he kept walking. Soon the flares had become a fire, and there was both smoke and singeing. When he walked off the carpet in his stylish black dress shoes, I moved closer and saw the matches placed vertically and evenly over the entire red playing field. The matches did stick up like nails, and I was indeed reminded of Gina Pane’s seminal performance Bed of Nails. Mattress of Nails? Nieuwenburg’s performance was titled Two surfaces in contact, and so they were. The shoes struck the matches and therefore combustion. The burning or singeing had formed what could have been a map of something, a ghost image. A ghost of a ghost. Dr.V. was not the only performer revisiting the classics.

It was time for the added performer - the mysterious guest. He was Christian Messier from Quebec. He stood tall on a campsite of sorts, with an at least half-consumed bottle of red wine and some sort of brick or log for company. He wore a white shirt that had already been slightly bloodied. He took the shirt off and put it back on. He repeated this tease many times. His pants looked like they might fall down, but they didn’t. He stretched out a lot. He had a nice body to stretch out with. After taking the shirt off yet again, he stretched it down on the floor or ground and inserted some tacks into the shirt. More nails. Then he put the shirt on again. He lay down and dropped the heavy object onto his chest, just missing his chin. He did this many times. He lit matches over his body and let them burn to their end. He poured white flour over his head and onto the ground. He exhaled the flour like a fire-breather, and then he drew blood from his chest and onto the floor. The floor was now a site of blood and flour. Considering the blood and flour in combination with the red wine, I thought I was watching a Robert Bly adaptation of Marina Abromovic’s Lips of St.Thomas.

But…Messier stood tall, shook off the flour, and some swirling strings became audible. It was a French Abba cover, and as the tempo accelerated, the performer started dancing and he sprinkled confetti, which baptized the front audience members. Xpace became a disco, with only the Disco God Ball missing. It was almost transcendent and it was beyond cornball. It was an unexpected cliché that really did work.

- Andrew
Posted by 7a*11d International Festival of Performance Art at 10:53 AM