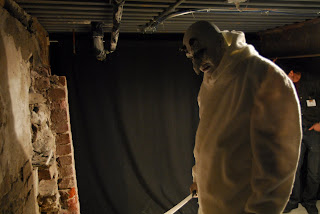 Warren Arcand is one of 7a*11d’s 2008 Creative Residents, a seasoned performance artist who can be expected to use this opportunity to gather, sew, develop, design, and score. On the festival’s opening night, Thursday October 23rd at XPACE, Arcan will be presenting Nosferanook This new work has already been in serious development, but it will develop further in front of an audience. Arcand sees audiences as his co-celebrants.

Nosferanook is a cross-fertilization. Nosferatu meets Nanook of the North. The perfectly legitimate love child of F.W. Murnau and Robert Flaherty. Nosferatu is a veteran at concealment or disguises. Murnau circumvented Bram Stoker and the Copyright Police by declaring a bat to be a rat. And Arcand will have the blood-sucker wearing the cloak of an owl, a rather unique animal indeed. Picasso’s final self-portrait was that of an owl’s face. Owls are predators without sense of smell. Talk about sustenance and survival.

“Nanook and Nosferatu; they strain against their frames - being impossible beings - untenable in many ways, yet persistent.” (from the festival catalogue) Are the dynamite duo and therefore their child allergic to systems? Well, they are both survivors and sustainers - it’s more like systems can’t tolerate or accommodate them. Arcand personally distinguishes between methods and systems - methods are intrinsic, they are in the self and in relationships between self and others and also objects. Systems are externally imposed - they must be navigated and negotiated, outwitted by stealth and wit. Systems are labyrinths and underworlds - a complex network of deities such as Demeter and Hades and Zeus, and not just those battling gods and humans but also Nature. Summer needs to reclaim time and space from the Eternal Winter and its consequent freezing..

Arcand is a performance artist with a serious theatrical background. Theatre when it’s visually interesting involves disguise. Performance often involves persona which may not be disguise but which is not a fixed essential self or a singular voice. Arcand plays with voice(s) - he plays with parallels and tensions between what is oral and what is written and what is musical. Music time is not unlike object time - it is sculptural and not always calculable. Performers and audiences share time and space when everything the performer has set in process is working, when the performer and performance are creating a structure without a rigid pre-determination. There is a trust involved here - a trust outside of the performer’s self. God and The Lover make for good structures, The Self makes for a bad structure, or formlessness with limited content.

In conversation, I am impressed by Arcand’s comprehension of body . He is always thinking, which is a bodily act. He is a good talker but he knows that language doesn’t always complement thinking and moving. Such is characteristic of a performing performance artist. Warren Arcand has been a man of many voices, faces, wigs, and costumes. With Nosferanook he will be stripping everything down. One wig and one costume. But they will be certainly grand.