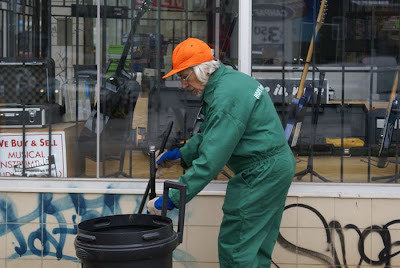 Despite the spattering rain and the wet sidewalks, Glenn Lewis performed the second of his Sweeping Statement walks this afternoon. The streets were cleaner today, and cleared of most of the fallen leaves -- in fact we encountered another sweeper (our third in as many hours!) today, forcing Lewis to be more creative with his garbage collection.

He spent a lot more time this walk negotiating barriers: searching through fences, under awnings and chains, into construction sites, beneath hotel steps, in decaying flower beds and even into recycling bins. The greatest physical barrier that presented itself was the sidewalk closure outside the Art Gallery of Ontario, causing Lewis to squeeze between concrete barriers and whirring traffic. But the sidewalks were sometimes just as difficult to traverse, Lewis' dustbin competed with baby carriages, pull carts and trolleys for real estate on the concrete.

In addition to increased resourcefulness, Lewis also took the name on the back of his jumpsuit (HOPE Engineering) to heart, showing the streets and all their inhabitants compassion. When he swept up sandwich wrappers, he would leave the stale food behind, offering it to rummaging pigeons; he stopped his walk several times to drop change into the cups of the homeless; he went out of his way to help people dispose of the garbage still in their hands.

Watching the expressions of passersby was particularly interesting. Most were unfazed by the events of the performance and continued on with their daily lives without even realizing Lewis was there. After all, though a little incongruous with his surroundings, a sanitation worker is hardly the most curious thing on the streets, especially given the number of them we have see so far. We did get significant portion of puzzled glances (most likely due to the valiant efforts of videography duo Annie Onyi Chung and Patrick Joseph Mifsud who doggedly trundled behind Lewis in a wheelchair-turned-camera dolly). Even fewer still were genuine smiles, although he did strike up the occasional conversation, and some people cheerfully donated the garbage they had on hand. 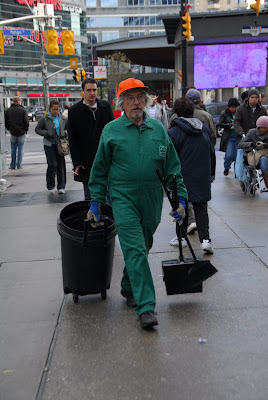 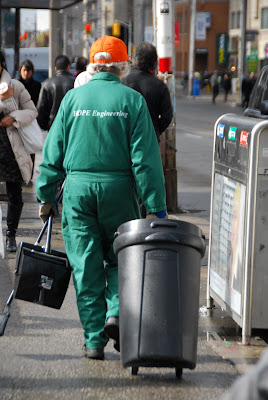 Photos (above) of Glenn Lewis by Henry Chan.

Returning to Queen and Dalhousie with a full container of somewhat soggy trash, Lewis had successfully collected enough material to begin work on the Abyssinian sanctuary that will showcase both the artifacts that he has recovered as well as the video diptych of the walks themselves, prepared by Chung and Mifsud. Stay tuned for Lewis' final performance at the Toronto Free Gallery on Saturday November 1st.

~Elaine
Posted by 7a*11d International Festival of Performance Art at 12:00 AM