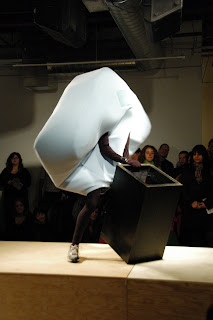 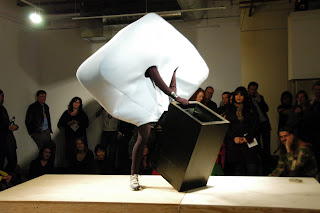 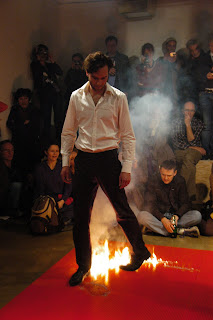 With throngs of people packed into the XPACE cultural centre, things were tight on 7a*11d's opening night -- a tightness of community and space that was mirrored throughout the night's performances, which both relied on and parodied intimacy and immediacy.

To begin the proceedings, we were introduced to the large, pale blue, foam rhombus of Will Kwan's 'Dr. V Does the Classics'. For those in the audience who didn't quite catch on right away (myself included), Kwan's first act remained puzzling. Arms taut with tension and sneakers straining with effort, Dr V struggled on the floor, consistently "failing to levitate," as festival-leader Johanna Householder explained to the crowd.

The audience was eager to support Dr. V, oohing and cheering whenever his legs made it off the ground, and letting out disappointed ohhhs when he invariably settled back down. However, we were able to claim our satisfaction in Kwan's second act, coming together to share a collective chuckle as Dr. V's meaning became much clearer. All he needed was a little bit of time to start taking effect. Once he got going, the strength of the infamous Little Blue Pill was readily apparent as he proceeded to thoroughly ravish an unassuming filing cabinet (both drawers!). 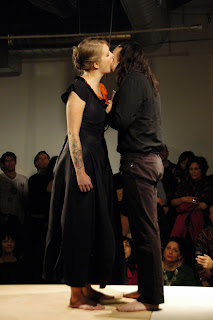 The first movement was a physical and auditory sculpture where the two were seated, each with their partner's foot in their mouth, belting away muffled love songs. Undercutting the familiar, cliched lyrics was the impression of love as a duality, a precarious structure built equally on support and suppression. Both artists visibly struggled to maintain their difficult balance, physically holding each other up, yet at the same time creating an atmosphere of competition that was emphasized by their overlapping voices and the microphone, reminiscent of those used by wrestling match announcers, suspended above them.

Their second movement further highlighted the amorphous shape of love as the pair sang into each other, seemingly vibrating each other's vocal chords in a piece somewhere between duet, asphyxiation and whale song. 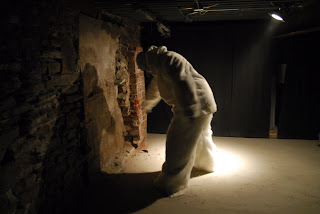 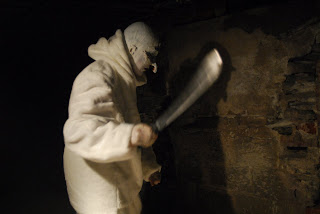 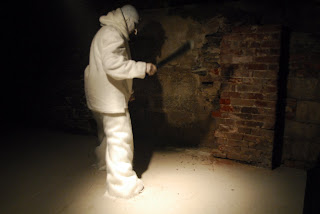 (above) photos of Warren Arcand by Henry Chan
To encounter Warren Arcand, presenting his piece 'Nosferanook', we then descended into the darkness of the basement, a space carved out of raw brick and concrete whose low ceiling and draped fabric evoked the atmosphere of a cave embedded in history. Emerging from the shadows in white furs, Nosferanook possessed a goblin's face and a man's machete, and it was a single light that pulled him across the room to a bare wall where he began to strike at the concrete. The clanging of metal on stone continued unceasingly as powder and chips began to build up at his feet.

He chipped away slowly at the foundation, at the wall behind the wall; at the social and physical barriers that we find already in place, that appear immobile and immutable. Although it may seem that this act is more symbolic than concrete (no pun intended), Nosferanook's labour leaves behind a visible pattern of contact, a physical trace of where his blade carved into the stone a complicated glyph to mark his passage.

The performance of Joost Nieuwenburg is another that urged us to lean in close. 'Two surfaces in contact' was comprised of two halves: the passive potential of thousands of matches embedded into red plastic, and the kinetic/active energy of Nieuwenburg himself. Just by walking atop his match-riddled platforms, he pushed the balance of energy from one side to the other, wavering in lines of tension.

As he made his rounds along the boards, he scuffed the match heads occasionally, igniting trails of flame, smoke and frissons of danger with his heels. The audience gasped and oohed accordingly At first there was no overtly visible difference between those that had been struck and those that hadn't; all four boards were hypersaturated with the potential that each match carried. In addition to the actual flames, the mind rushed to imagine the chain reactions that could occur and the possible sight of every square inch of plastic up flames.

Yet as he walked faster and stuck his heels more deliberately, Nieuwenburg's channeled and directed energy was funneled into flames that spread in a tight pattern, melting the red plastic into a dull grey stain that crept across the boards like that of a water-damaged ceiling tile. And we were satisfied with the matches left unburnt, recognizing that they preserved the fine balance upon which Nieuwenburg was walking. 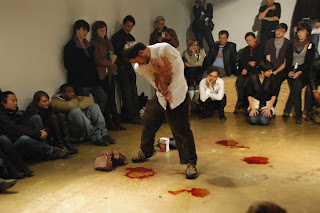 (above) photo of Christian Messier by Henry Chan
Special guest Christian Messier wrapped up the festival's first night with a endurance performance that exposed the body's rituals of undoing. Using wine, tacks, flour and matches, Messier offered himself to the audience in a series of physical images drawing on Christ-like imagery.

He posed, he revealed, he endured. But every act was coupled with its un-act: wine drunk was spit up; shirts worn were undone; matches lit were extinguished; pain endured was transformed into not-pain. The pain endured was simultaneously emphasized as present by his bodily reaction, but also was rendered absent as his mental will denied it and made it into not-pain. The very acts of endurance that relied on highlighting the physicality of the body served to counteract, suppress and unravel the body's defining characteristic of being sensory.

(below) photo of Christian Messier by Henry Chan 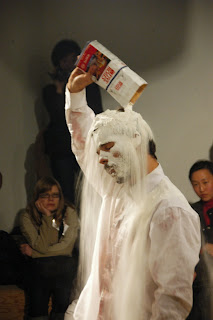 Undoing the seriousness of the sacrifice he had given us, Messier ended on a positive note, dancing along to ABBA and throwing confetti to remind the audience that there is more to life than enduring the physical -- and that there is always time to sing and dance.


There are many exciting performances lined up for tomorrow! Look forward to creative resident Sylvette Babin's, Norbert Klassen's, Risa Kusumoto's and Pia Lindy's performances at XPACE in the evening. And don't forget that Chaw Ei Thein will be continuing her mobile mural in the Toronto Free Gallery from 12 to 7PM, and that Glenn Lewis will be performing the first portion of 'A Sweeping Statement' at 12PM starting at Shaw and Dundas West.

~Elaine
Posted by 7a*11d International Festival of Performance Art at 5:02 AM