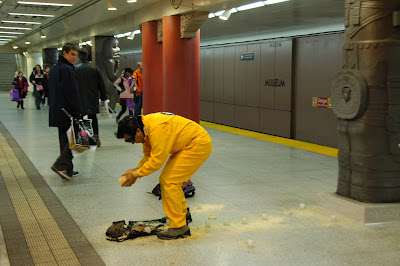 I had been tipped off the Chihuahua-based performance artist Gustavo Alvarez (Musgus) had been planning a performance action starting at the bus stop by the Old City Hall at three o’clock. I get there early and nobody’s there. I think of checking out the City hall Library and checking my email for location and/or schedule changes, Then Gustavo shows up.

He is wearing his Made in Mexico yellow windbreaker and a head/helmet of sorts. It is a hat worn in wrestling and the colours are spectacular. An almost emerald green with bright yellow outlining the head functions - the eyes, nose, and mouth. Seeing, smelling, and talking/tasting. And other 7a*11d folks show up, and it becomes apparent that Gustavo’s performance will be taking pace on the street car. TTC tokens to the rescue.

Eight 7a*11d people get on the bus and move roughly to the centre of the street car. It’s quiet at first, and then Gustavo begins distributing the bells he carries in a bag. People check out the bells. Some of them begin ringing the bells. You can ring my bell oh yeah ring my bell. A chorus of ringing is taking place - nothing to stop traffic or the bus. But perhaps these bells have to do with the prematurely cold weather. Perhaps Gustavo is one of Santa’s elves?

Er, no. I don’t think so. Gustavo begins addressing the riders, quite angrily. “Exists Terrorism, Exists Poverty. Exists Money, Exists Bad Government. What do you think about that?” The TTC is a method of transportation lying somewhere between public and private. It is open to and thus dependent upon the public, yet it is a system which individuals agree to utilize on condition that they can ride that system and maintain relative privacy. The TTC, like public transit throughout the world, is intended to be neutral, and now the radical subjective has raised its voice. Except that the radical subjective is not alien to many of the transit riders. Terrorism, poverty, financial straitjackets, and corrupt governments are hardly alien to many if not most of the people on the bus. Except…they deal with these omnipresent conundrums in their own spaces in their own times.

Gustavo switches tone from negative to positive and cries out that somehow there exists hope. He stresses the suggestion that there is still hope, even though there is terrorism, poverty, material straitjackets and exchange systems, corrupt governments, etcetera. It is becoming too much for some passengers. A man accompanying a child informs Gustavo that he had crossed a line - that he has upset the child. The child is crying but not screaming and bawling - this is not an emergency situation. I have been on the Queen West street car before and heard domestic arguments via cell phone leakage as well as monologues that invade the relative privacy of the passengers. I have witnessed the police being called in to intervene and preserve silence on the public transit system. This doe not happen today. But perhaps it could have happened if Gustavo had travelled for a few more stops and continued to violate the uneasy silence that characterizes public transit. The contrast between celebratory (the ringing bells) and the accusative (the performer’s angry litany) was startling and potentially upsetting. Gustavo Alvarez de facto created what Hakim Bey has called a Temporary Autonomous Zone, or a DMZ. Outside of the law, outside of the state, and alive with its own highly visible and disputable contradictions.

Wednesday evening’s programme was not a series of live performances at XPACE; it was a relaxed evening of direct-to-disc performance documentations in the social space of the Gladstone Hotel’s Melody Lounge, in tandem with the Gladstone’s weekly “Granny Boots” series. In two sections, broken up by Ulysses Castanello’s DJing, the audience was treated to not only performance documentation excerpts but some events or actions staged for various cameras. Some works shown were by single artists and might have fit in with the 2008 7a*11d live programming, some were site-specific, some veered towards pranksterism and/or sight gags. Concurrent with the video-viewing, there was an “intervention” by performer Leanne Lloyd (who will be performing in tandem with Robin Poitras Friday afternoon outside the Design Exchange). The performer moved slowly throughout the bar dressed in an interestingly stitched original costume, eyeing the audience and other bar-customers. She was a Super Sexy CEO. She (and the festival) used the word “intervention” for her performance, which had been promoted not only within 7a*11d events but also on Canada’s Akimbo arts-promotional services.

Leanne Lloyd described her presence as an intervention. Gustavo Alvarez MusGus describes his public performances as actions. Are these synonyms? Are they cousins? I have heard “intervention” used to describe spontaneous or at least quasi-spontaneous interruptions of other events. Lloyd did not interrupt the screening, she didn’t particularly distract people from the ongoing programme, she blended into the evening’s ambience (which is not at all a bad thing to do). Her intervention was not confrontational - Alvarez’s public actions are confrontational, in the way that they can jolt an uneasy civility taken for granted in public space(s). When MusGus asks where have the memories gone and scatters memorabilia on streets and in parks, he is transgressing unofficial but entrenched divisions between what is private and what is public. Is he not making an intervention? He is certainly disrupting and problematizing daily routines and complacencies. 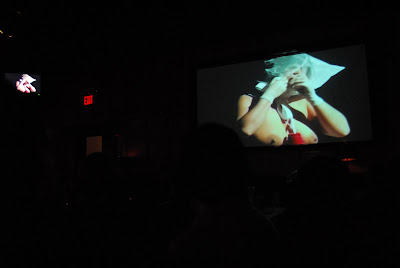 At the top of The D2d video programme, 7a*11d steering-committee member and performance professor Johanna Householder observed that most of the performances witnessed so far during the 2008 festival are exactly that - performances. Not “relational art”, or “spoken word”, or sight gags. Not “performative art”. This has, at least so far, been a festival of performance art. Bodies have been the fulcrum, even when the works are also rooted in sculpture or sound or even language. There have been works characterized by the formation of images (Norbert Klassen, Francis Arguin, Jason Lim… others), but the formation of images has not been the prime focus of these performances and thus they are arguably performances and not performative artworks. On the festival’s last Sunday afternoon, there will be a panel titled Terms of Engagement: Presence and the Performative. Panellists will include, in addition to Ms. Householder, Paul Couillard of 7a*11d (and up to recently of FADO), Helsinki’s Annette Arlander, and Grande Dame Tanya Mars (electronically possible from Paris, Francs). This should be a well-attended and well-debated afternoon event.

Gustavo Alvarez will be performing another action in public space on Thursday afternoon. The meeting place is outside The Opera House. Opera had traditionally been associated with well-dressed and well-heeled theatrical excess - those who dislike opera consider it ridiculous, and what exactly is wrong with being ridiculous? There is, come to think of it, something quite operatic about Gustavo Alvarez/MusGus.
Posted by 7a*11d International Festival of Performance Art at 10:37 AM